"Everything Happens for a Reason: And Other Lies I've Loved" - Kate Bowler 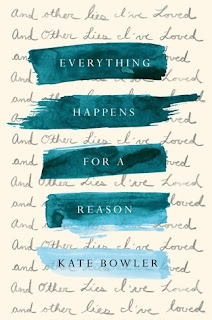 I was almost relieved when, a mere three months ago, I was hospitalized after 30 years of relative health stability with a rip-roaring case of dehydration, severe infections, and a leg that had ballooned to such a large size that I was wearing pants over six sizes larger than my actual waist so that I could have pants that would fit over the leg.

You see, I've technically been considered "terminal" since birth. After being born with spina bifida in 1965, a time when around 95% of babies born with spina bifida died, I was given 3 days to live. Then, I was given weeks. Then, I was given months. Then, a few years with severe physical and cognitive disabilities. Then, until my teens. No one ever helped me prepare for my adult years because no one expected me to reach my adult years.

I reached my adult years. No one expected me to go to college because, well, cognitively it just wasn't within the realm of possibility. I went to college and graduated with a 4.0 GPA. I've been to seminary. I work. I drive. I own my home.

Oh yeah, and at the age of 54 I'm still around. Oh sure, I'm now a paraplegic/double amputee with spina bifida. Three months ago, I went from being a double below-knee amputee to having the remainder of my left leg amputated. While I'd had a few health issues along the way, I hadn't been hospitalized inpatient for 30 years when I suddenly found myself passing out in my home, inexplicably falling out of my wheelchair, and otherwise just plain struggling.

I'm on the rebound now and hoping to return in a couple of weeks. I'm still considered "terminal," by the way. With every new challenge, I'm reminded that I should slow down, remember my limitations, and maybe make different choices.

At the age of 54, that's probably not happening.

I can look back at my life, though, and I can see the ways that being "terminal" impacted my daily existence. Other than a brief and incredibly misguided marriage in my early 20's, I've largely avoided anything resembling long-term relationships. I've avoided parenting. I've avoided too much commitment in a career I never believed would happen. I've avoided retirement planning. I've avoided the "future," because all I had was the present.

I try not to just write "reviews" of a book. I try to write about my experience with a book.

"Everything Happens for a Reason" is definitely a book I experienced - I didn't just read it. I absorbed the chaos of the world in which Bowler found herself as a happily married woman, an associate professor at Duke Divinity School, an author, and a new mother who also had added to the mix the diagnosis of colon cancer which, next to rectal cancer, is one of those cancers that you simply don't want to get.

An acclaimed author on the subject of prosperity theology, Bowler weaves her knowledge of and experiences with prosperity theology throughout the otherwise autobiographical story that unfolds in "Everything Happens for a Reason." In essence, she views her experiences with colon cancer through both her personal lens and through a theological lens. I have a feeling this is why some readers have struggled with the dual nature of the book, both memoir and theological reflection. While I found it tremendously engaging and thought-provoking, those seeking nothing more than a memoir will likely find it more disengaging and even a little jarring.

It's obvious throughout "Everything Happens for a Reason" that Bowler is struggling not just with her colon cancer but with a theology that teaches that all tragedies result from some test of character or some flaw or weakness in belief or practice. She beautifully brings this struggle to life in the pages of "Everything Happens for a Reason" and yet also paints a powerful, painful portrait of a woman who, at the age of 35, is forced to face life through a "there is only now" lens.

If there's a challenge with "Everything Happens for a Reason," it's likely that Bowler's balancing of both personal and theological lenses doesn't always gel into a cohesive whole. My sense is that this is partially happening because Bowler herself was continuing to struggle with the issues in the book and, as such, couldn't make sense out of something that didn't actually make sense. If you've studied theology or history, then you'll likely be able to fill in some of the gaps but for most readers it's probably not realistic to expect them to be able to fill in the gaps.

I found the lack of concreteness refreshing, however, as so much of living with a terminal or chronic illness is filled with that lack of concreteness. I still spend almost every day of my life asking "Am I dying or not?" Trust me, that's a weird way to live.

The theological circle is a tight circle. I saw this myself during my most recent amputation, a hospitalization during which I saw zero family members but saw multiple members of my theological circle including pastors, peers, people I went to seminary with, and former mentors. Bowler captures how this circle supported her and even helped her access treatment options that would ordinarily not have been available to her as a Canadian working in the U.S. (though I do wish Bowler had delved a little more into the idea of privilege - that she did, in fact, have access to treatment options not available to the wider public. I don't begrudge her these options, but theologically it's a valuable area to explore).

While some have observed that Bowler seemed negative toward healthcare professionals, I found her honesty and observations spot-on and wonderful. In my most recent hospitalization, I had one consulting physician come in on his iPhone talking, end the call, take another call, look at my leg and pronounce abruptly the need for amputation before quickly leaving the room. On the other side of the coin, Bowler is profusely appreciative of those who cared for her and cared for her well but she's also intrigued by those who care for people with relentless commitment with no clear sign that their work will prove successful or even beneficial. She seemed endlessly intrigued by a doctor who committed himself to her journey while simultaneously recognizing the possible futility of it all.

Bowler's book is, in the end, a book of radical honesty and insight. Near the end, for example, she cites those things one should never say or do with a person in circumstances such as hers. However, she also shares openly those things that do help and that helped her. I found both lists rather spot-on and simple yet powerful.

"Everything Happens for a Reason" won't connect with everyone. It's a weaving together of the intellectual and emotional experiences of living with cancer and a good majority of similar memoirs focus largely on the emotional experience. It's a less dramatic and traumatic read, though it does contain drama and humor and insight and the trauma of knowing that when you're gone the life you're living right now will go on without you.

While Bowler's survival is well known since her latest book was released in October 2019, I appreciated the open-ended nature of "Everything Happens for a Reason." It's as if she's learned that valuable lesson about not skipping to the end and chooses to end her writing in the current moment. It's a weird way to end, but it actually made me smile and stop to wish her well and wish her success and wish that she gets to watch her son grow up and her husband grow old.

When I started writing this review and realized that I would be inevitably writing about some of my own personal experiences, I realized I'd also be violating one of mine and Bowler's own rules for support - it's not particularly helpful to share your own experiences when trying to support someone. While there may be applicability, more often than not it's a space filler and a faux common bridge that contributes little to nothing. Yet, I couldn't really write my review of this book without reflecting upon my own experiences with illness and with this book. I couldn't really say "I found this to be true and this to be true and this to be true" without explaining why I deeply resonated with "Everything Happens for a Reason" and the dueling that goes on between heart, mind, and body when one experiences an illness the world calls terminal. I couldn't explain why I practically jumped for joy when she wrote about "skipping to the end" without explaining why I've been doing that my whole life because I've always had more faith in the end than in the now.

Heck, I'm not even sure why this book happened. Oh sure, I know it really got its birth in a New York Times article and in one theology professor's life experiences but it takes a certain chutzpah and vulnerability to decide "I'm going to write about this entire experience and how it really messed with my faith and my academics and my theology."

I'm just glad this book did happen because I look forward to revisiting it again and again.
Posted by RPropes at 11:09 PM