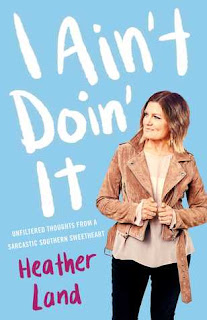 I will admit that I knew almost nothing about Heather Land when I discovered her book on the shelf at my local library branch.

The premise sounded promising - a sarcastic Southern sweetheart who seemingly found a path to success using a gimmicky social media concept that went viral with a catch phrase - "I Ain't Doin' It" - that people found both funny and appealing. As I've been stuck at home for a few weeks recovering from a serious health issue, I've needed more than a little funny to keep me going and I was certainly hoping that this collection would fit the bill.

Land sounds like a delightful human being. I'm thrilled that she's found a path to success via a comedy gig that seems to have turned into a semi-inspirational gig. This review is certainly not a reflection of any view of her as I've never seen her act, never met her, and wish her all the success in the world.

About 1/4 of the way through reading "I Ain't Doin' It," I actually went over to Youtube to check out some of Land's videos. I knew I wasn't connecting with the book and I wanted to see if I could figure out why. The first issue was that, at least for me, her sassy humor simply wasn't translating to the written page. In the videos, she has a freshness and spontaneity - while I'm sure she "rehearses" to a degree, most comics do, she's got a fresh spirit that is at least reasonably fun to watch. That spirit just didn't come to life for me in the writing. The writing felt way too intentional, overly processed, and devoid of personality.

"I Ain't Doin' It" felt like someone trying really hard to write a book that would please her fan base while also trying to say something that matters. The words are there. Sometimes, they do matter. I have zero doubt that aspects of this book will certainly resonate with Land's target demographic. For those outside Land's demographic, however, it's hard to imagine that "I Ain't Doin' It" will truly manage to connect.

I think the wild variation in ratings/reviews is a solid example of this being true. Those who love it seem so really love "I Ain't Doin' It." Those who hate it, well, really hate it.

Then, there's folks like me. I certainly didn't love "I Ain't Doin' It," though that's probably evident from my 2-star rating. I didn't even like it. I also didn't hate it. I found it to have more than a little potential and desperately in need of an editor who would have said "Oh honey, this entire section makes little sense!" or "Do we really need this entire reflection that has no humor in it and basically does nothing to preach AT people?"

A better editor could have made Land look a whole lot better here.

I never laughed during "I Ain't Doin' It." I smiled once. In case you're wondering, I seem to recall the smile came during chapter 15, a bit of spark came through that felt like something someone would actually say and it was delightful. I never connected with Land's faux inspirations, a weird mix of gravel road Southern sweetheart meets flawed Jesus freak - when you consider the inexplicable success of some faith-based writers, there's no doubt this approach will work for some. It didn't work for me - not because it came from a place of faith, but because all too often Land couldn't successfully weave humor into her faith. She either wrote faith or she wrote humor - the two seldom peacefully co-existed.

I am a professional critic by trade. As a professional, we don't avoid bad films. We review everything - good or bad, Oscar caliber or Razzie quality. That's my approach to film criticism. However, I don't intentionally pick up books I don't think will be high quality or that I don't believe I'll connect with in some way. I read because I enjoy it and the reviews I write here are simply because I enjoy writing and offering feedback. As a professional writer, I despise the idea of simply bashing another writer. I don't give 5-star reviews easily, because "I loved it" is not nearly enough to reflect actual top-notch quality, and 1-star reviews are even more rare because writing is hard work and I prefer to encourage folks.

"I Ain't Doin' It" has potential, but it doesn't feel like Land was entirely comfortable with her voice here. She was trying too hard to do too many things and she ended up not doing any of them incredibly well. The book is never as funny as you'd expect it to be, while the attempts to be inspirational feel flat and forced. There was something there - I liked Heather Land. I wanted to feel the real Heather Land in this book and "I Ain't Doin' it" just didn't do it for me.