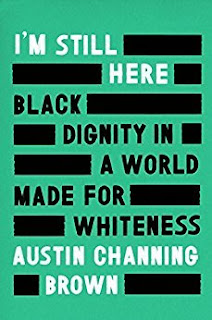 It was late at night and I was in the mood to read before going to sleep. I'd just finished a different book, a much lighter book within the humor genre and was craving something more substantial than my available unread options on my Kindle. I pulled up my trusty local library's website to browse available e-book options. After checking for a few recent releases and coming up short, I stumbled across a link for Austin Channing Brown's late 2018 release "I'm Still Here: Black Dignity in a World Made for Whiteness."

While I'd intended to read a few pages before heading off to sleep, I was so quickly absorbed in the book that by the time I finally set aside my Kindle and allowed myself to sleep I'd read 70% of "I'm Still Here" and finished it up the very next morning.

It's always difficult to use the word "love" to describe a book that is so convicting, but the truth is that I did love "I'm Still Here."

I loved Brown's growing insight into her own history and story. From the moment that she learned that she was named Austin by her parents to give her a name that sounds like that of a white male, Austin Channing Brown has been on a search for identity and belonging. "I'm Still Here" is partially her poignant and powerful memoir and also partially a social justice tapestry that seeks to create, in essence, equity in society, in business, in church, and in the eyes of God.

Brown addresses, passionately and angrily and with tremendous detail, a lifetime of indignities experienced, commonplace microaggressions, and the everyday lack of justice that follows the Black experience in America and that has followed her life. She speaks of learning to love her Blackness while also learning how not to compromise it in the majority white non-profit institutions where she has often worked and how she found a place of acceptance and even celebration within Black churches where she found her calling and her voice.

Brown describes growing up in a largely white area of Toledo, Ohio before her parents divorced and she found herself experiencing a full-on black neighborhood and black church in Cleveland where she really began her journey toward discovering black culture and learning about her own blackness. Brown writes about her high school and college years as she learned more about black history and became increasingly involved in racial reconciliation.

Brown's faith is an element of "I'm Still Here," though it's relatively modest in presentation and as a subject. Much of her work has been with progressive Christian non-profits and churches, though it seems these settings have often been the most troubling for Brown as they present with a facade of diversity rather than with a true diversity of thought and culture that comes with creating a diverse workforce or membership or body of any type. Instead, Brown has often found that organizations, even those outwardly seeking diversity, instead seek to assimilate.

Brown accomplishes much in what is really a relatively short, quick read. While I deeply appreciated, for example, Ta-nehisi Coates's book, it's a much more dense read that can be exhausting in both subject matter and tone. While Brown often writes with tremendous anger, "I'm Still Here" is paced differently and this pacing and tonal balance makes it a book that is easier to engage with throughout.

While some reviews have lamented that Brown seems to be saying that all whites are racist, I'd say she's simply not individualizing it but pointing out that, as her title implies, the world is made for whiteness and all others are, or in her case specifically blacks, are expected to adapt, assimilate, or compromise their culture, identity, welfare, thoughts, beliefs, etc. As the majority culture, at least in America, whites control the institutions and the institutions are designed in such a way to ensure that continues. As such, as Ibram X. Kendi wrote, you're either racist or anti-racist. You're either supporting the system and culture that is racist or you're actively working to dismantle it.

There is no gray.

Brown is relentless in discussing how racial reconciliation has become a watered down concept, while she describes even the more progressive movements as possessing a sort of numbers-oriented diversity concept devoid of actual substance. She explores both "white fragility" and "white guilt," refusing to cater to post-workshop confessionals as she is not a "priest for the white soul." Her aim is not detachment, per se, but more an acknowledgement that such confessionals are nothing more than a baby step and lack any real sense of commitment toward reconciliation. If she were to give a response, it would be along the lines of "What are you going to do about it now?"

"I'm Still Here" radiates and reverberates with a sense of "What are you going to do about it now?" While the book at times feels like Brown is absolving herself of responsibility, one need only look at the daily work of her life to realize such a thing is far from the truth. While it's certainly arguable that "I'm Still Here" is somewhat lacking in terms of action steps and "What's next?," the book leans into an idea of healing one's identity but I also found it refreshing that Brown doesn't offer cookie-cutter solutions or any sort of paint-by-numbers remedy.

What I found most exciting and energizing about "I'm Still Here" was Brown herself. She is intelligent, engaging, personable, passionate, angry, and undeniably committed and this comes through in every word. She feels like someone you could sit down with to discuss these issues, though she also feels like someone who will call B.S. when B.S. needs to be called. If you've ever watched her engage with people on Twitter, and I have, she's immensely engaging and accessible yet also challenging and more than open to debate when it appears debate offers a constructive movement forward.

I still say that I loved "I'm Still Here," though I still can't help but feel like "loved" is the wrong word. It feels almost like the timid statements that Brown so fervently abhors. "I'm Still Here" did more than engage me - it challenged me to explore "What can I do now?" and to actually come up with concrete actions rather than some silly little list that gets put on my desk or my fridge and paints an image of enlightenment that simply doesn't exist. It made me aware of the things I do that don't help, while also digging deeper to see how I can transform that desire to do something into something that's actually beneficial and meaningful.

As an added benefit of note, as an adult with a disability who lives in a society that stresses ability I found myself exploring my own "ism" of ableism through the kind of lens offered by Brown. I began to explore my own ableist attitudes and actions and began to explore my own identity in a world that is far from made for those with disabilities.

"I'm Still Here: Black Dignity in a World Made for Whiteness" is a book that beautifully and powerfully balances both memoir and social justice into a call toward healing one's identity and working actively toward racial reconciliation and taking back the definitions of racial justice that have become far too watered down.
Posted by RPropes at 11:05 PM