"Leaving the Witness: Exiting a Religion and Finding a Life" - Amber Scorah 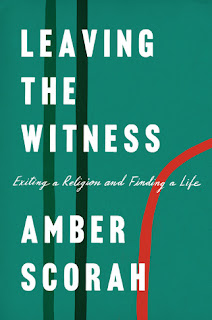 Like several of the other reviewers who've checked out Amber Scorah's involving "Leaving the Witness: Exiting a Religion and Finding a Life," I am a former Jehovah's Witness who has long since left the religion behind.

Like several of the reviewers, I also have a mixed response to "Leaving the Witness." I'm appreciative of Scorah's fairly strong detail in documenting the life of a Jehovah's Witness and, more specifically, the life of a "Pioneer," those JW's often deemed among the most dedicated for the hours they dedicated to preaching the "truth that leads to eternal life."

In my case, I was raised Jehovah's Witness. I was been born with a significant disability and expected to die and my mother grew tired of the response of her Catholic priest. She left Catholicism for the JW's, a weird conversion for someone who had been a left-leaning, Kennedy-supporting Democrat but who now found herself part of a religion that essentially ignored politics.

My mother became baptized and grew into the ranks of the Pioneers, no small task with a small child at home with a disability and a husband who wasn't a member and refused to attend after his clothing was criticized after one such visit. Fortunately, I never became baptized - a fact that would mean I was not officially "disfellowshipped" when they determined I was gay and removed me from all church roles and removed all my social relationships. In reality, I was one of a long line of people whose sexual abuse/violence was swept under the rug by the JW's. Never quite repentant enough for my actions, I eventually tired of the JW's and went away. My mother? We'd never been remarkably close anyway, but she certainly never shunned me and was eventually disfellowshipped herself largely because of her inability to quit smoking.

The overwhelming feeling I had while reading "Leaving the Witness" was one of sadness. I felt tremendous sadness for Scorah as a woman who seems like she's spent her entire lifetime trying to feel loved and trying to fit in somewhere. The JW's are a master at exploiting just this type of individual as they offer, at least for those who are compliant, a familial structure that to this day I have a tendency to defend even though I've been gone for over 30 years.

"Leaving the Witness" feels like the book of someone who has not yet healed from her lifetime of experiences including her many years of dedication to an abusive, dysfunctional religion. I don't recall a time when Scorah refers to it as a cult, a definition I'm somewhat hesitant to use myself, though there's little denying that the religion is wildly abusive with cult-like tendencies.

Scorah, a 3rd generation Jehovah's Witness, is struggling with being a Jehovah's Witness even as she begins writing the book. Raised in the religion, she "strays" when she has sex outside of marriage in an act that led to her first time being disfellowshipped by the church. She would eventually be repentant enough that she was welcomed back, a journey that includes sitting at the back of a Kingdom Hall and essentially learning while being ignored by all in attendance. It's a rather intimidating journey, but she went through it and eventually married a young man. They grew together, yet the entire book is essentially her having misgivings about the marriage from step one. He would eventually grow into a role of an elder, while both would become Pioneers - learning in Taiwan before eventually entering China where their work was illegal.

The interesting aspect of "Leaving the Witness" for me is that it works better as an examination of the type of individual who is attracted to an organization such as the Jehovah's Witnesses. I say this acknowledging that both my mother and I fit a similar pattern and I think it's very telling. Throughout "Leaving the Witness," Scorah really never commits to much of anything - she's a social misfit unsure of her place in society and ill-equipped in terms of self-esteem and self-identity. She sort of fumbles into her first sexual encounter, knowing it was wrong yet in many ways finding a security and place to belong at least temporarily. Scorah herself identifies this period as not particularly healthy, yet she went there anyway.

Then, she fumbles her way back toward the Jehovah's Witnesses. Yet, the way she writes it's as if she returned not because she actually believed but because it was a place that was familiar and she welcomed the structure even if the structure was suffocating. The entire tone of the writing is such that it appears she never actually believed what she was teaching - she practiced what she was told to believe and she trusted that she was told the truth. Eventually, when someone challenged that trust the trust began to erode (rather easily, I might add).

The way she writes, I actually felt rather badly for her husband. It's certainly not rare in this day and age to get into relationships for all the wrong reasons, but it's rather obvious she never loved him yet her eventually leaving him led to his removal as an elder. This after she had wandered away for a flight to meet this mystery guy who challenged her faith, yet anyone even reading the book can tell is obviously just exploiting in much the same way the JWs did.

We learn very little about actually "Leaving the Witness" here. Instead, I think we learn a lot more about the type of individual drawn to an organization like the Jehovah's Witnesses and how they've learned how to exploit individuals who are seeking a place to belong, a place to find structure, and a place to find "family." An end of the book tragedy isn't given nearly its due - it feels tacked on here and like much of the book is given only surface treatment.

I wanted more about Scorah's actual journey of leaving and the experience of exiting and finding a life, material the title seems to promise yet material that really isn't provided. In its place, Scorah offers episodic great detail and terminology but most of these terms are already in the public vernacular.

Essentially, "Leaving the Witness" feels like Scorah is still leaving. She's built a life outside the Jehovah's Witnesses, but she's still figuring out what that means and she still has unresolved issues with the experience. Trust me, I understand this as to this day as a progressive-leaning Christian I find myself periodically defending them until they arrive at my door and I snarkily respond "You already kicked me out once."

"Leaving the Witness: Exiting a Religion and Finding a Life" is a valuable read, but not really an essential read for those interested in this topic whether that be the Jehovah's Witnesses, cults/cult-like religions, and what it means to leave such a setting. I appreciated Scorah's writing and her journey, but my hope is that as her life continues to unfold she'll be able to return to this topic and write more clarity and emotional resonance.
Posted by RPropes at 6:45 PM