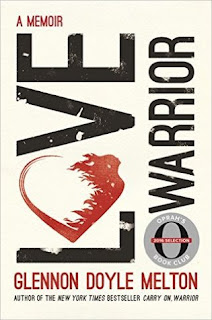 It's no secret that I've read both of Glennon Doyle Melton's book back-to-back. While I've long been aware of her, it's been more of a distant awareness. I'm a 50-year-old disabled male, not a parent, and probably not what I would consider anything close to her target market.

Prior to this past week, I followed her on Twitter and that was it. I'd never read her books. I'd never looked at Momastery. I'd never heard her speak.

However, I must confess that I found her World Cup tweets an absolute delight and I was aware enough of her life journey that I was interested if not particularly motivated to actually track down her books.

But, there was something in those World Cup tweets that made me think "I need to read her."

So, I started with "Carry On, Warrior" and instantly fell in love with her raw, honest, vulnerable, confident, blog meets testimonial meets motivational style of writing. It's not far removed from how I write, though she actually makes her living as a writer while mine is a part-time income.

But, I was hooked.

I wasn't so sure about "Love Warrior." It's weird, in some ways, reading a book such as "Love Warrior" when you kind of know the ending that's not the ending of the book.

While "Carry On, Warrior" was a clear 5-star read for me, I struggled a little more here between 4-5 stars. Truthfully, 4.5 is probably more accurate for me but I'm curving upward for reasons I'll explain.

First off, while I was willing to defend my "Carry On, Warrior" rating this is a book where I understand why it won't resonate with some readers - even those who loved her first book. While "Carry On, Warrior" could certainly get intense, it was varied and paced differently and also quite a bit lighter and more humorous than this book. While Melton was still painfully revealing at times, she was also glib and sarcastic and funny.

"Love Warrior," on the other hand, is often just a downright painful read. It's beautiful and difficult and messy and Melton doesn't let up in quite the same ways. While I hate to use this term considering her challenges, the truth is that much of this book feels like a soul-level purging of personal demons and immense pain. At times, that purging reads like a sort of staccato styled narrative that feels breathy and exhausting and weird.

Yet, what I marveled with was how genuine it all felt.

The second half of the book became an easier read for me. The first half found me stopping and starting and resting from the emotion of it all, but by the second half I was able to really immerse myself in it.

Without giving away spoilers, I will say that there was one section that made me absolutely fall in love with Melton and this book. It's a short section where she's dealing with the pending birth of her first child (Chase) and is informed by the doctor that he will probably have a disability. She and her husband become defensive at the doctor's tragic sounding town - they leave the doctor's office and spend much time preparing for this truth via study, learning, etc. In one line, she had me in absolute tears when she talks about when she finally gave birth and, in fact, Chase did not have the expected disability. She basically states that she had to grieve the loss of the child she expected to have, while celebrating the child she did have (she says it differently and much better).

As an adult with a lifelong disability, I've gotten so used to hearing parents say "the only thing I want is a healthy child" that to see in writing a mother so ready to be a mother to a child with a disability and in a sense having to adjust to that not occurring was simply profound and deeply moving to me. It blew me away.

I also decided to rate the book a 5-star rating because it truly feels like this is the book that she needed to write and it's the book it needed to be. The fact that it was a difficult book to read is irrelevant to me. She beautifully wrote the story that needed to be told, even though I wasn't always comfortable with it and couldn't always identify with it.

In fact, she so vulnerably wrote some things that she convinced me to add back to a book I'm writing a section I'd left out because it felt too obscene. As I was reading a section of this book, I just thought to myself "Nope, it needs to be in there. It's part of my truth."

In some ways, I think observations that "Love Warrior" is more self-involved are incredibly accurate. Yet, I also think that's the point. "Carry On, Warrior" was Melton discovering she had a gift and intentionally sharing that gift openly with her readers; "Love Warrior" feels more like it was actually written for her yet also in such a way that she knows she's not alone in this type of journey. It's for her, yet she shares it with everyone. It's a thin line between the two, yet it's an important line.

I won't quite say I "loved" "Love Warrior," but I will say I found it immensely satisfying and emotionally resonant. I'm changed because I wrote it and I'm grateful for her wonderful World Cup tweets that made me finally sit down and read her books.

Now, I need to find something light to read!

Email ThisBlogThis!Share to TwitterShare to FacebookShare to Pinterest
Labels: Biographies/Memoirs