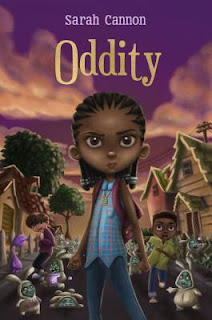 As I wrapped up the closing words of Sarah Cannon's "Oddity," I breathed a sigh of satisfaction and relief completing a story I'd thoroughly enjoyed while also not being burdened with figuring out how to create one of my kinder and gentler criticism pieces so as not to offend someone who is, in fact, a semi-regular part of my life.

While many people enjoy reviewing a friend's book, truth be told I dread it. As someone who writes film criticism professionally, I have a complete inability to write a false word in a review. I can be kinder. I can be gentler. I just have to be honest.

That doesn't always work out well.

While I understand some of the criticisms that I've seen lobbed at "Oddity," Cannon's first book that is aimed at the 4th-6th grade crowd, for the most part, I disagree with them wholeheartedly.

This doesn't mean I didn't contemplate a 4-star review, though I can say I never contemplated lower than a 4-star review. I've ultimately decided upon a 5-star for reasons that I'll explain throughout the course of my review.

First off, this is one book where I'll openly acknowledge that knowing the author had a certain unexpected benefit. As I began reading, I began hearing Sarah's voice as a sort of hallucinatory audiobook version that was completely in my mind. It added a personality to the book that I found completely delightful.

I also want there to be zombie rabbits.

Cannon's story largely centers around 11-year-old Ada Roundtree, who probably could have qualified as a Nancy Drew type if the story took place in another time and another place. She's innately curious and impossibly mischievious. She's a vividly realized character and the anchor upon what most of the early pages of "Oddity" depends as we get to know her family, her friends, and the unpredictable world of Oddity.

Ada's world includes her best friend Raymond and the town's new kid, Cayden, in all the way from the relatively normal life of Chicago. Ada lives with her parents and her Aunt Bets, the latter easily being my favorite character in the entire book as a fellow double-amputee. The family's in a state of flux, Ada's sister Pearl having won the town's annual Sweepstakes before subsequently disappearing.

The already adventurous Ada becomes even more adventurous after Pearl's disappearance, embarking on risky explorations and quests to uncover Oddity's truths and underlying secrets. When one such mission goes awry, Ada and her friends discover hidden aspects to the town's beloved Sweepstakes. Suddenly, seemingly innocent quests have life-changing implications for Oddity, Ada, the townsfolk and, perhaps most importantly, for Pearl and other sweepstakes winners.

There are those who think Cannon spends an extraordinary amount of time developing the world of Oddity before delving into the meat of the story. While I understand this quibble, structurally it feels a lot like the Harry Potter series. Whereas Rowling would occasionally throw you brief expository reminders and hints to keep you on track, Cannon tends to be more trusting of her reader's ability to maintain a connection to the story. It seems like a good majority of those who've had issues with the book have either - 1) Not completed the book past this point or 2) Had difficulty following this type of narrative structure.

I've always struggled with the idea of reviewing a book that I didn't finish - something I simply don't believe in doing. I take the same approach to film. If I don't finish the film, which never happens, I refuse to review the film. I think "Oddity" is a great example of why this is necessary. "Oddity" is an entire experience. While the early part of the book is somewhat confusing, it sets the stage rather nicely for where the story is going. So, you may be confused early on but by the book's end, you're definitely not going to be confused. You may not be entirely satisfied, but you won't be confused.

In terms of narrative structure, I do get the concerns. Cannon packs a lot into the 300+ pages of "Oddity" and I won't say I felt completely satisfied with each character's development. Raymond, for example, left me unsatisfied with his story arc. However, the few quibbles that I had with the story and the structure were ultimately surpassed by my enjoyment of the story, the world that Cannon created, and the characters that I really enjoyed including my favorite, Aunt Bets, whom I noted in a social media message to the author I wanted to play in the stage version.

I mean, seriously. I'm a double-amputee. I'm practically tailor-made for Aunt Bets. Okay, the end might be a bit of a trick but I have faith I could pull it off.

I am not a regular reader of middle-school lit or YA lit. I've always wanted to try my hand at writing for children/youth, but my mind ultimately just doesn't go there. I admire greatly those who can create such vivid worlds and stories and make them age-appropriate. Cannon has certainly accomplished that task here.

While I had minor issues with character development and a couple of issues with the abrupt resolution of stories and conflicts, these were minor issues that never distracted from my enjoyment of the story that unfolded. It felt, at least to me, like the tone and pacing shifted a bit toward the end of the book and it didn't feel completely natural to me. It felt more like a literary device rather than a natural shift inspired by the story.

I ultimately wrestled with the 4-5 star review debate. So, why a 5-star review?

In other words, I don't give a crap about a minor structural issue or a minor character development concern or a tonal shift or the one painful and lonely typo that actually made me laugh. I ultimately care that Cannon has crafted a book that is fun to read and teaches children lessons that I want children to learn about living in this world with themselves and with one another.

The end result is that I loved "Oddity" and I look forward to Cannon's next book coming out in February 2020.
Posted by RPropes at 7:25 PM