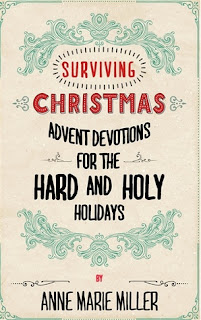 Have you ever read a book from a new author, or at least "new to you," and found yourself finishing the experience by instantly looking them up on Amazon to see what else they've written?

I picked up Anne Marie Miller's "Lean on Me," a book that delves into the building of intentional, vulnerable, and consistent community and I instantly felt as if I'd found a literary kindred spirit.

Then, as I began to read more about her background I began to feel like even though I'm older that she would have even more to teach me along my journey.

"Surviving Christmas: Advent Devotions for the Hard & Holy Holidays" may seem like an odd book to read at the end of June, but the truth is that by the time I typically get to December I'm even more of a loner than my introverted self is on a daily basis. By the time I hit the "funk," it's basically too late to use common sense.

So, packing the toolbox early is a good choice for me.

I was raised a Jehovah's Witness. Thus, I never grew any sort of attachment, healthy or otherwise, to the holiday season. By the time I'd been booted from the JW's, one of two churches to kick me out, I was just starting to experience the holiday season when tragedy struck in the form of the suicide of my wife and death of my newborn daughter. Since then, I spend 11 months of the year as this incredibly inspired, socially aware activist and wildly insane paraplegic/double amputee who far exceeds what most consider my limits.

December hits? I basically go into a fetal position and wait for it to be over. In the old days, having a therapist who would call me on Christmas Eve helped. As my social circle developed, that certainly also helped. Over the past few years, while I unquestionably slow down over the holidays it's become more of a muted experience than an actual bad one. Until this past Christmas, when I inexplicably bottomed out in a pretty severe way and found myself the recipient of some unexpected compassion from a minister at a church I'd merely visited.

I was floored by her kindness. Truly. I still am.

While our reasons for struggle are different, Miller writes "Surviving Christmas" in such a way that it can apply to a variety of circumstances and situations. I appreciated that it's non-shaming - seriously. It's also not complex, because when you're in the muck the mind just can't do complex. I need simple. Heck, she even uses one devotion to serve up a healthy recipe. I'll never make it, of course, but I love that it's there.

The book, I believe, is self-published, which adds in the glory of a couple typos. I say this for no reason other than to bless it - it adds a layer of humanity to a warm, naturally written book. We all make mistakes and that just made me love the book more.

"Surviving Christmas" is one more tool in the toolbox. It's not a cure-all. It's not the remedy. If anything, it's a reminder that you need God and people and community and whatever you find to be your healthy coping skill. I have a feeling that for Miller, writing is one amazing coping skill. I'm the same way, so I get that.

As I was wrapping up reading "Surviving Christmas," I looked up to realize that she had actually responded to my review of "Lean on Me." Timing is everything and that finally let the tears fall a bit as I finished up this book and contemplated the steps to be taking in my life to avoid a repeat of last year's holiday season.

If you're like me and struggle through the holidays, "Surviving Christmas" is a simple, warm, and understanding devotional that will certainly help.

Email ThisBlogThis!Share to TwitterShare to FacebookShare to Pinterest
Labels: Religion/Spirituality