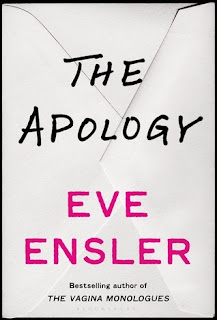 As a survivor, the minute I saw Eve Ensler's "The Apology" on the shelf I knew what it was going to be about. It was this gut instinct that this book would be Ensler's autobiographical journey through an apology that never happened.

Indeed, that's exactly what "The Apology" is and that's largely why so many have responded so strongly to it.

Most know Ensler from her acclaimed "The Vagina Monologues." Named by Newsweek as one of 150 Women Who Changed the World, Ensler has long used her own life experiences to improve the world and the lives of others.

That's exactly what Ensler aims for with "The Apology," a book written by Eve from her father's point of view in the words she longed to hear. With this book, Ensler attempts to transform the horrific physical and sexual abuse endured from her father, some of which is somewhat graphically depicted here, with honesty, compassion, and vision for her future having received, as much as possible, the apology she so desperately needed.

The literary style of "The Apology" felt, at least for me, an awful lot like Ta-Nehisi Coates's "Between the World and Me," a book in which Coates wrote a book-length letter to his adolescent son with a similar vision of creating a better world for the future of his son by creating what was, in many ways, an exegesis of his own life experiences with racism.

The subjects are obviously different here, yet I felt very similarly after reading both books. This was a book I wanted and expected to fully embrace, yet this is a book I struggled with from beginning to end.

It should be noted, and I think it's important, that "The Apology" is primarily directed toward female survivors. This is evidenced most directly on a page that precedes the book where Ensler writes "For every woman still waiting for an apology." On the cover, it reads "Like millions of women, Eve Ensler has been waiting much of her lifetime for an apology."

While Ensler often writes utilizing non-gender specific language, this narrative focus is undeniable and influences both her writing and, I believe, how some male survivors will receive the book. I don't necessarily fault Ensler for this approach - if this was what brought her healing, then I'm all in favor of it. As a male survivor myself, I think male survivors need to approach the book with the full awareness that while much of what Ensler applies to the survivor journey, in general, I ultimately think the book is somewhat dismissive of male survivors.

Based upon Ensler's literary and personal history, I believe this to be an intentional and understandable choice. Do I believe Ensler had an obligation to write inclusive of male survivors, especially when the entire book's focus was on holding one man, in particular, accountable and obtaining the never received apology? Of course not. However, and I do have a disclaimer, Ensler's book is not simply marketed as a memoir - it's also marketed for the universality of its message. I'd say "The Apology" is MUCH more successful as a memoir, while I'd say the attempts to market its universality are misguided. This is not a prescriptive book, something Ensler herself has acknowledged.

For the most part, Ensler writes from her own personal experiences and in a way that is avoidant of gender-specific language outside obvious and appropriate references to herself. Ensler writes in a way that weaves together eloquent authenticity and obvious literary flourishes. How you resonate with Ensler's language may very well help determine how you resonate with her writing - will the book trigger you if you're a survivor? I think that potential is present, however, I also found that Ensler's literary style of writing created a buffer of sorts and I can't say I found the book to be a trigger. I do think that certain survivors will breeze through the 115-page book, while others will need to take the book in increments - this isn't easily done as the book's not in "chapters" or essays. The book is a letter from beginning to end.

Ultimately, where "The Apology" succeeds the most is in Ensler's realized ability to create a work that is both artistic and empathetic. She realizes, and takes us along for the journey, that the apology she has long waited to receive from a father who has been dead for 30+ years must be birthed from inside her if it is to be made fact. She imagines, more for herself, that his soul is in some state of spiritual limbo pending resolution of these matters and leaps from there into 115 pages of gut-wrenching, devastating life truths inflicted upon her with intentional brutality that sought to destroy her but failed to do so.

Assuming that Ensler truly writes the words she most needed to hear, it is difficult to fault the book at all. A 115-page book is not a long book, yet it is a long letter filled with a lifetime of experiences that go well beyond any notion of "hurt." While it seems at times that Ensler is at least modestly explaining away her father's behaviors, it's important to keep in mind that in writing from her father's point of view she's also empathetically allowing him the journey toward being able to apologize.

It takes him nearly all of the 115 pages to truly get there.

As a reader and as a survivor, I had the same issues here that I had with Coates's book in that there came a point where the unfolding letter began to feel more like a literary device than an apology. Like Ensler, I've longed my entire life for an apology from my perpetrator(s). The hard part is that such an apology looks different for all of us, or at least all who are survivors or who have been wronged. It was difficult for me to fathom a 115-page apology and an often graphic recounting of wrongs committed - is this the standard by which we should judge a sincere, repentant apology? If so, I'd say we're all destined for a lifetime of disappointment. I'm in my early 50's and nearly every apology for every wrong in my life has been the equivalent of "I'm sorry" and, when truly sincere, modeled by behavioral changes. At some point in "The Apology," the father's letter, especially with the added idea of being in limbo, begins to feel a little self-serving. Additionally, the language of the father, even given what we learn about him, often doesn't feel authentic but instead feels like Ensler's voice desperately searching for the apologetic voice she never heard.

I may ultimately grow to feel differently about "The Apology," a book I expected to fully embrace yet a book that I both embraced and became troubled by in certain ways. Despite being a survivor of both childhood sexual abuse and adult sexual assault, I'm not sure I'm intended as its target reader and that likely influenced my experience with the book. I believe most survivors will "feel" the book powerfully, though I'm not convinced it will ultimately benefit most survivors with that same power. As noted, it's not a prescriptive book. It feels like a cathartic literary work for Ensler that will likely open up new channels for her in the work that she does that is so desperately needed and that I deeply respect. All I can ultimately go with is my own experience - "The Apology" is a valuable, vital read from a woman who has spent much of her adult life healing from the childhood she was given and working incredibly hard to support others in doing that same work. I'll always applaud survivors speaking out - even when I don't completely resonate with their work.

"The Apology" may have not completely worked for me, but I applaud it all the same. If you are a survivor, either seeking that unreceived apology or simply learning how to voice your experiences, "The Apology" is challenging yet profound place to start - if you are prone to be triggered or having flashbacks, I recommend you make your primary support person, paid or natural, aware you are reading the book to ensure your emotional and physical safety.
Posted by RPropes at 5:10 PM