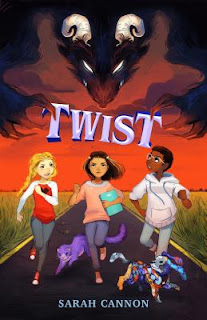 There's a special feeling you get when you finish a book with a twinge of sadness, a regret that you've finished your journey with this story and these characters.

I got that feeling as I wrapped up Sarah Cannon's second middle-grade novel "Twist," a gently wicked thriller centered around three kids - Eli, Neha, and Court - whose special gifts create a special world that threatens to spiral out of control and into disaster.

Eli has a dream of being the next Stephen King and he's just created his biggest and baddest monster yet... and for Eli that's saying a LOT!

Neha has a more secret dream. An artist at heart, Neha has hand-drawn a fantasy world she calls Forest Creeks that has become inhabited by rather fantastic imaginary creatures she considers her friends.


Court? Court is really good at finding trouble and stopping trouble. When she accidentally finds herself with one of Neha's drawings, she quickly realizes that she's found a whole lot of trouble as the monsters from Eli's stories have invaded Neha's otherwise peaceful fantasy world.

When the three of them unite and accidentally create a doorway between Forest Creeks and the not-so-imaginary real world, every monster Eli has ever created is unleashed upon their Oklahoma town and it's going to take all the bravery, smarts, and quirky little gifts they all have to save themselves, their friends, their families, and their town.

If you've ever watched the early-to-mid 1980's kid-friendly adventure flicks tinged with frights and delights like "E.T.: The Extraterrestrial" and "Ghostbusters," then you have a fairly decent idea of what to expect in terms of atmosphere and feeling from Cannon's "Twist." "Twist" has kid-friendly scares, healthy doses of humor, more than a little affection, a deep appreciation for the creative intelligence of kids, and even a few rather hilarious tongue-in-cheek moments where adults will recognize and shriek in delight.

Set in Oklahoma in the year that I graduated from high school, 1983, "Twist" is most successful because Cannon writes up to children and trusts their intelligence, creativity, and emotions to understand and immerse themselves in this story.

Having only recently become aware of Cannon's writing, literally reading her first middle-grade novel "Oddity" within the last couple months, I've grown a deep appreciation and enjoyment for Cannon's ability to create fantasy worlds dipped in reality and characters that feel like authentic, vibrantly alive human beings. Cannon's writing always feature healthy doses of diversity and she brings the diverse cultures of the characters alive in honest yet imaginative ways.

While many of the structural elements of "Oddity" are present in "Twist," Cannon's approach here is to kick off "Twist" with less devotion to creating the fantasy world and more focus on immersing us in the story itself. Similarly, while the adults played a fairly substantial role in "Oddity," "Twist" is largely centered around a small group of middle-grade kids with the exception of Amy, Court's older sister, and her boyfriend.

As was true with my experience of "Oddity," I found myself bonding particularly with one specific character and in "Twist" it was Amy.

"Twist" will be perceived in different ways by different readers.

There will be some who see "Twist" as a rather straightforward middle-grade novel, an imaginatively written story filled with adventure and thrills and chills.

Of course, this is enough.

There will be some who will find themselves exploring the story's almost undeniable environmental elements, elements that won't be discussed here yet weave themselves into the tapestry of the story.

There will be some, and this is mostly where I find myself, who embrace the way that Cannon parallels the monsters that follow us throughout life - from childhood until our very end - and how we address those monsters, confront those monsters, make peace with those monsters, and surround ourselves with people who help us, guide us, nurture us, and heal us.

"Twist" is really a book that you can enjoy simply for its story, yet it's also a book where you can explore its themes, its lessons, its subtle and not so subtle references, and its ridiculously enjoyable pop culture references. It's a book I enjoyed reading immensely and a book where I felt a twinge of sadness as I arrived at its closing pages.

Kids will love "Twist" and I'd dare say that adults will enjoy and appreciate the discussions that follow.
Posted by RPropes at 4:24 PM