"When Life Gives You Pears: The Healing Power of Family, Faith, and Funny People" - Jeannie Gaffigan 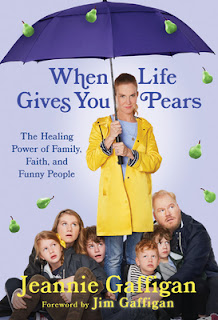 I'm sitting here in my Indianapolis home about two months after amputation of my left leg above the knee. While this may sound dramatic (it is), it's simply the latest stop on my lifelong journey as a paraplegic with spina bifida who became a double below-knee amputee in my early 20's.

The amputation happened after a 10-day hospitalization due to severe dehydration, a high risk for folks with spina bifida that was coupled with severe infections.

I'm healing. Well, except my left leg. It's gone.

I'm figuring out what it means to live this life. I'm having to re-learn almost every aspect of life from transfers to showering to getting into bed to toileting to how I sleep and how I drive. I've been off work for two months and likely have another month to go.

I reflected on my own journey a lot while reading Jeannie Gaffigan's "When Life Gives You Pears: The Healing Power of Family, Faith, and Funny People."

If you like the comic Jim Gaffigan, her husband and partner in all things creative including parenting and most of Jim's shows, you'll likely love him after reading this book because this book makes him sound exactly like the Jim Gaffigan you want him to be.

You'll also learn a lot more about Jeannie, who is very much an equal partner in Jim's work yet who largely has spent her professional career working behind-the-scenes and out of the spotlight despite having her own background in theater. You will likely adore her and either want to have coffee with her or want to do some theater with her.

The two make quite the pear (Sorry, I couldn't resist).

It's obvious that Jeannie is his co-writer, because as you read this book you'll likely start hearing Jim's voice at times. They obviously have complementary senses of humor and you can feel that throughout the book.

If you've ever dealt with serious illness, you'll likely appreciate "When Life Gives You Pears" even if you don't quite get into the rhythm of its humor. I'm a huge Gaffigan fan and embraced the humor.

Jim and Jeannie have five kids - so, of course, family is important. They also both come from large families - families that showed up en masse when Jeannie was diagnosed with a benign, yet life threatening, pear-sized brain tumor.

I loved "When Life Gives You Pears," though I initially struggled a bit to get into its rhythm. Do I think it's a 5-star book? Not quite.

I love that Gaffigan writes authentically. At times, you almost feel like she's having a conversation with you. However, at times, it's also sort of stream-of-consciousness and that stream can interrupt a really good dramatic flow. At times, she diverts from a great story with an anecdote that's not necessarily so great. I also found the ending a bit unsatisfying - sort of anti-climactic. I mean, yeah, I knew she survived the the brain tumor. It's really hard to write a book about surviving a brain tumor if you didn't actually survive the brain tumor, but there's this abrupt shift about 30-40 pages from the end where we go from discussing hardcore medical concerns into basically the story of how Jim and Jeannie met then into "I'm grateful for the tumor." While the "Jeannie meets Jim" section sort of maintains the book's tone, the whole "I'm grateful" just didn't quite click for me. I mean, I'm glad she's grateful and I get it - it's just written differently and left me feeling differently than I'd felt the entire book.

There's one other aspect of the book that bothered me and I'm almost hesitant to mention it. Yet, I can't deny that it bothered me.

She writes an entire book about her experiences with a life-threatening brain tumor. Early on in the book, she writes about the connections that helped her get seen quickly and essentially bypass the normal procedures and head straight up to see the head of Mt. Sinai's Neurosurgery Department. She writes about all the tests, the surgeries, the time in ICU, the procedures, the home health, the professionals who entered her home, and much more.

I couldn't help but wonder if she realized the privilege that exists in all of these things. She never, at least that I can remember, mentions the financial aspect of all of this journey. I will assume she was insured, though certainly she and Jim are major successes in the comedy field. When she and Jim first met, she was working with children who could be considered at risk. Does she realize that she was privileged to have access to and to be able afford the top-notch healthcare that she writes about? I really wanted somewhere in the book for her to acknowledge it - not to apologize for it, because she and Jim have worked hard for it and earned it - but to acknowledge it because there's simply no denying that having access to quality, consistent healthcare increases your likelihood of healing and recovery.

Maybe I'm a little more in-tune with this right now. I'm sitting at home trying to learn how to put a wheelchair in my car because there's simply no way I can afford an accessible van that I now need. I don't begrudge her having access to all those wonders that helped her heal, but it's a privilege so many others simply don't have. Jeannie and Jim sound like amazing people - I wanted to get to know both of them here, but this book was a golden opportunity not necessarily to go political but to be able to say "thank you" that I had enough to assemble this amazing team. She thanks the amazing team, which is awesome because they did amazing work. She thanks her family, profusely.

I mean, I even get into my own sense of privilege. I've been off two months, but I'm still getting paid. I still have a job to go back to. I have insurance that has a maximum out of pocket expenditure. I've lost everything in my life twice - literally living in my car - because of my body. This time, I didn't have that risk. What a privilege.

Okay, I'm off my soapbox now.

Seriously, I truly loved this book and while I think she could have done a little less rambling and taken the book into some even deeper places I think it's a vital book and an enjoyable read. While I can't quite go the 5-star rating, I'll easily give it up a thumbs up and 4-stars.
Posted by RPropes at 6:55 PM