"A Wish in the Dark" - Christina Soontornvat 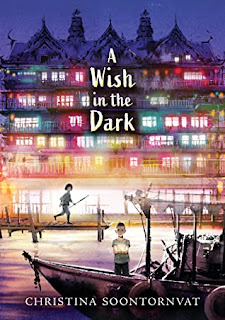 The Indianapolis-based Cannon offered what can only be described as a rave for "A Wish in the Dark," an incredibly engaging tale set in a Thai-inspired fantasy world vividly brought to life by Soontornvat's imaginative yet natural language and imagery.

The world that Soontornvat creates is known as Chattana, a land once destroyed by a "Great Fire" that now prospers under the mystical leadership of a man known only as Governor. The city is one known for its seemingly magical lights, lights that are indescribably beautiful yet seen only from a distance by a 9-year-old boy known as Pong. Pong's life is anything but magical, a childhood spent inside the walls of Namwon Prison due to his having been born the child of a prisoner. For Pong, these faraway lights represent a freedom he has never known.

When the opportunity avails itself and Pong escapes from the darkened environs of the only world he's ever known, he quickly learns that even where there is light there is darkness and the mystical world he enters is no more fair than the one he left behind.

Along with leaving behind his best friend Somkit, Pong leaves behind a disgraced prison warden and his already vulnerable family including Nok, his perfect daughter whose days become consumed by tracking Pong down and restoring her family's good name. Yet, even for Nok there are lessons to be learned as she hunts Pong down the alleys and through the canals of Chattana and soon discovers herself that the only life she's ever known is not what she's always believed it to be.

"A Wish in the Dark" is an intelligent and inspired retelling of Victor Hugo's esteemed "Les Misérables," and while such an objective is perhaps lofty there's little doubt that Soontornvat makes that novel's incredible story more accessible than it's ever been while still telling a story all her own.

As I hunkered down last evening under my blankets on a chilly Indianapolis night determined to complete my literary journey with "A Wish in the Dark," I simultaneously lamented that such an accomplishment would also end my days inside this remarkable world created by Soontornvat.

"A Wish in the Dark" is a book that teaches without ever preaching. It's a book that looks at issues of privilege, protest, and justice without ever losing the simplicity and wonder of its story. "A Wish in the Dark" casts its fast-paced adventure tale without speeding through the character development we need to embrace such lovely and intriguing souls as Pong, Nok, Somkit, Father Cham, Ampai, and even the Governor among others. It's a story that embraces the dark parts of life without ever, as one character does, exploiting it.

In short, "A Wish in the Dark" is both a meaningful story for readers of all ages, but especially middle-graders, and an incredibly entertaining and involving reading experience.

There were moments, and I do mean more than one moment, during "A Wish in the Dark" when I shed a tear, not just out of sadness but out of the joy of fully realized characters living fully realized lives filled with joys and sorrows, lessons and self-discovery. I nearly wept at the honest, natural of the friendship between two boys, Pong and Somkit, that is captured in a way that's so rarely done even in children's literature.

Yet, there were also moments when I laughed aloud as characters, especially Pong and Nok, stumbled upon their "Aha!" moments with spontaneity and innocence and grace.

As a longtime activist myself, it would be easy for me to write an entire essay on the social justice lessons alone in this insightful, intuitive work of fiction alone. As an adult reader, I embraced, perhaps with more clarity than ever before, the ways in which poverty and oppression are institutionalized and not simply cyclical in nature.

I also embraced something that I've spent most of my life teaching as my mantra - one person can make a difference in the world.

Yet, for all its valuable lessons and deeply ingrained values what I don't want to get lost with "A Wish in the Dark" is the beautiful and wonder-filled story being told by Soontornvat. "A Wish in the Dark" is truly inspired by its Thai roots and nearly perfect in the way it weaves together its characters and its culture. It's both fast-paced and incredibly patient, adventure-filled and remarkably intimate.

In "A Wish in the Dark," we are told “You can’t run away from darkness. It’s everywhere. The only way to see through it is to shine a light.” Indeed, in a world that can feel so incredibly dark "A Wish in the Dark" is pure light.
Posted by RPropes at 8:19 AM