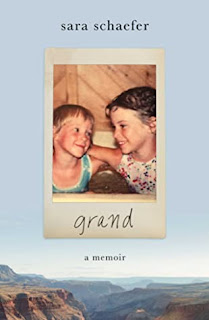 If you've ever seen stand-up comedian and writer Sara Schaefer, it's hard to deny that she carries the aura of someone who has lived a little, laughed a little, loved a little, and worries about it all.

"Grand: A Memoir," scheduled for release by Gallery Books/Simon & Schuster on August 11th, captures both sides of Schaefer and much more in a self-penned journey through the Emmy Award-winning writer's past and present beginning with a childhood that included a scandal that changed the family forever and ultimately culminating in Schaefer's 40th birthday celebration whitewater rafting trip down the Colorado River with her younger sister, Ross.

"Grand" is at its best when Schaefer is exploring the rawness of her life's extremes, whether that be the often poignant yet hilarious challenges of camping with a group of wildly different strangers or the complicated grief over her mother's death that seems to finally bubble up to the surface during Schaefer's way out of her comfort zone trip with her sister. Schaefer isn't hesitant to delve into the darkness of her father's financial scandal, a scandal that cost him a career, the family a grander life, and seemed to detour the entire family's life away from their previous secularism into a committed religious life. She's also not hesitant to talk about her rise to fame as a popular writer/comedian/podcaster and how that fame fueled the flames of an already disintegrating marriage and her own choices that turned an inevitable but likely amicable divorce into a more complicated, highly conflicted one.

Schaefer shares it all. She shares it with heart and humor and honesty and even a few tears. She shares what it's like to experience sexism in the workplace, sexual harassment pretty much everywhere, and rough sex that probably crossed the line.

It was in first grade that Sara told what she believed to be an innocent lie. Of course, the lie was discovered and led to the first of many "dad-isms" over the years, advice that one lie leads to another and soon you find yourself in a hole from which you can't escape. First grade Sara didn't realize how true her father's words were until years later when his own lie, an at first seemingly innocent effort to maintain the family's rather grand Midlothian, Virginia lifestyle, would come crashing down.

Yet, in many ways the truth did set Sara's family free and this is a lesson that has seemingly never been lost on Sara. For the remainder of Sara's childhood, a former upper-middle class lifestyle became more of a working class one with father Billy, mother Billie, and siblings Sara, Ross, Jay, and Cristy immersing themselves in their faith and in serving others. While "Grand" laughs at many of those dad-isms, it's equally true that Sara has come to embrace them over the years even as her family's abrupt transformation seemed to trigger her own obsessive, anxious personality.

By the time Sara reaches 40, she's won two Emmy Awards for her work as Head Blogger for Late Night with Jimmy Fallon and acquired a variety of accolades from being named one of USA Today's "100 People of the Year in Pop Culture" to being cited by New York Magazine as "One of the Ten New Comedians that Funny People Find Funny."

Yet, it's obvious from the pages of "Grand: A Memoir" that Schaefer, whom I can't seem to decide if I want to call Sara or Schaefer, remained unresolved about her life, her loves, her family, and the anxiety/depression that seems to have been a consistent if not entirely constant companion that grew in intensity following the death of her mother.

So, it's that 40th year that is at the heart and soul of "Grand," a 40th year that finds Schaefer taking a 1:1 trip with each of her family members up to and culminating in this wildly adventurous trip through the Grand Canyon with her sister, her guides, several other interesting characters, and more than a few animals along the way.

The stories that unfold are filled with Schaefer's brand of enthusiastic and honest humor grounded in real life, though she infuses that humor with vulnerability and honesty and a rawness that comes alive because she paints the truthfulness of her relationships and her own human foibles so completely.

Sara's relationship with her mother is, perhaps, one of the most amazing parts of "Grand" because it captures so beautifully the weird and wonderful relationship between mother and daughter. Billie, who loved the middle-upper class existence she enjoyed with her family in Midlothian, embraced her working class existence and, in fact, would eventually start the non-profit Pennies From Heaven, Inc., a non-profit devoted to serving those even less fortunate. There are moments in "Grand" when you can't help but mumble to yourself "I want that mom!" and, indeed, Sara seems wonderfully in touch with the good, the bad, the challenging, and the pretty amazing parts of growing up with her quirky yet lovable tribe.

"Grand" is at its best when it feels spontaneous and alive in the moment. There are other moments in "Grand" that feel overly processed, as if Schaefer perhaps spent just a little too much time finding the perfect wording or searching for the punchline in a story that didn't necessarily need one. In these moments, "Grand" feels just a bit flat and lacks the spark that much of the book, and easily the majority of the book, carries. These are minor concerns, really, for what is, without a grand memoir centered on a grand journey that brought Schaefer closer to her sister and seems to have opened up parts of her that continue to fuel her continued growth in the comedy world.

Humorous and heartfelt, honest and often emotionally exhilarating, "Grand: A Memoir" is a wonderful story about self-talk and self-identity, the stories that made us and the stories that we grow into in our lives. It's a memoir you will most assuredly remember.
Posted by RPropes at 6:55 AM