"It's Like Heaven: Stories from Camp Sunshine" - Edited by Dorothy H. Jordan 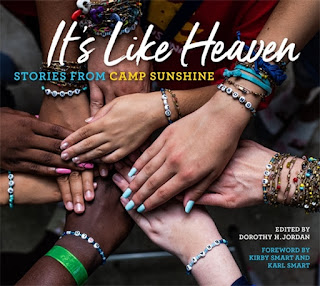 With an expected June 2020 release date from University of Georgia Press, Dorothy H. Jordan's "It's Like Heaven: Stories from Camp Sunshine" arrives in the public eye on the heels of the award-winning Netflix documentary "Crip Camp," an often sentimental and frequently political look at New York's groundbreaking Camp Jened and the disability rights activists it produced.

While you might expect "It's Like Heaven" to have a similar tone given its based upon a camp started in 1982 by for children with cancer started by Ms. Jordan, wife of the late President Jimmy Carter Chief of Staff Hamilton Jordan, nearly the exact opposite is true.

If there were a genre called "feel good" books, "It's Like Heaven: Stories from Camp Sunshine" would fit comfortably within it.

Founded in 1982 as a place for children with cancer to experience the normalcy of childhood in a safe place, the camp's first official season was in 1983 when approximately 40 campers between the ages of 7-18 attended the camp held in the north Georgia mountains. 35 years later, more than 400 campers attended the 2018 camp and several hundred more campers and family members participated in more than 150 additional recreational, educational, and supportive Camp Sunshine programs held throughout the year in Metro Atlanta, Savannah, and other areas of Georgia.

Camp Sunshine, unlike Camp Jened, continues to be vibrant in its existence and is a non-profit organization with hundreds of volunteers who provide support to the camp's ongoing leadership staff along with pediatric oncology nurses and doctors who support the campers.

"It's Like Heaven: Stories from Camp Sunshine" is a "feel good" book, though not always necessarily a happy one as not all of the children whose stories are told within the book's pages have survived with their stories being told by family members, friends, or counselors. Yet, rather remarkably, "It's Like Heaven" maintains its upbeat tone throughout and it's clear that even when a life has ended tragically that Camp Sunshine provided each of these children a place where they could be themselves "as is."

Each chapter in "It's Like Heaven" is a former camper's personal story about their childhood cancer journey and their years at Camp Sunshine. After each testimony, the book rather uniquely includes another story by the camper's nurse or another member of the Camp Sunshine community. It's a rather poignant approach to telling the stories of struggle and the stories of healing for each camper and, in fact, many of Camp Sunshine's staffers. Every story also include beautifully vibrant photos of the campers, their mentors, and the overall vibe of the Camp Sunshine experience.

It's difficult to express just how much the photographs add to the overall impact of "It's Like Heaven."

As a writer of both book and film reviews, I'm often quite honestly about my own life experiences growing up with spina bifida and subsequently living far longer than anyone ever expected. As a child and teenager, my own disability experiences were given a safe place to express themselves within Martinsville, Indiana's Bradford Woods and the Riley Hospital sponsored "Camp Riley," a place where I could annually be myself and become comfortable with the things that physically made me different from my peers. I grew as a human being at Camp Riley, more comfortable with myself and more comfortable with the world around me.

From reading the stories within "It's Like Heaven," it's obvious that Camp Sunshine has had a similar impact on generations of children and teens who've often survived and thrived through their childhood cancer experiences and, at least it would appear, have often found themselves later working in the helping professions such as nursing or medicine or other areas of healthcare. For many of them and for many of the camp volunteers, Camp Sunshine becomes not just an annual experience but a lifetime commitment and a lifetime community.

The casual tone in "It's Like Heaven" often makes it read like you're sitting down and having conversations with these people. The stories are told in first-person and there's far more of an emphasis on maintaining the writer's distinct voice than there is a pre-occupation with writing expertise or any sense of formal structure.

For the most part, this works wonders as "It's Like Heaven" often feels spontaneous and natural and honest. There are times when the testimonies border on repetitive and, yes, the word "camp" is used an awful lot in the book and it's almost to the point of distraction. However, these are really minor concerns for a book with such a good heart and such a genuine, compassionate spirit.

For those who appreciate motivational and inspirational stories, especially those centered around children, "It's Like Heaven: Stories from Camp Sunshine" is sure to be an enjoyable reading experience. It's also likely to resonate with anyone who's ever experienced childhood cancer or other chronic health conditions that have impacted daily life or led to your own life-changing camp experiences.

For children who endured so much, it's crystal clear that 35 years later Camp Sunshine is still just like heaven.
Posted by RPropes at 7:45 PM