"One Last Lunch: A Final Meal With Those Who Meant So Much To Us" - Edited by Erica Heller 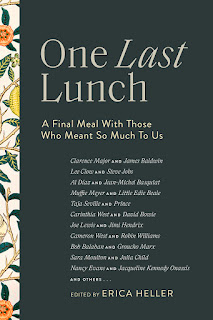 "This isn't what I expected," I found myself mumbling to myself early into Erica Heller's intriguingly titled "One Last Lunch: A Final Meal With Those Who Meant So Much To Us."

A few pages later, I found myself mumbling "I'm just not connecting with this at all," a fact that I found exasperating as the material itself is just SO me.

Several hours later, I was done with Heller's "One Last Lunch," my initial misgivings having given way to a sort of free-for-all surrender to Heller's incredibly literary collection of essays centered around one central concept - the universal longing for one more moment with a lost loved one.

Heller invited dozens of people to imagine one last lunch with someone they cherished; these invitations were extended to friends and families of authors, artists, musicians, comedians, actors, and others.

Heller herself contributes, of course. The daughter of writer Joseph Heller, Heller offers up essays that bookend "One Last Lunch," the first grounded in more than a little fantasy while the last more intimate and raw as if Heller's heart and mind could not escape seemingly inescapable truths.

As is always true of a collection of essays, some will resonate more than others. There will be some essays where you will finish them and declare to yourself "This doesn't belong here!," a declaration that will likely prove incorrect by book's end as it becomes abundantly clear why each and every essay deserves its place in this world that Heller has planted.

Yet, it is also understandably true that much of your experience with "One Last Lunch" may very well depend upon your own experiences with loss and grief, unanswered questions and deep longings.

If you're expecting "One Last Lunch" to be a sort of "Chicken Soup for the Grieving Soul," then you may find yourself more than a little disappointed. "One Last Lunch" is, in fact, far more literary than you might expect and it's filled to the brim with stories from celebrities, both known and relatively unknown, whose life experiences may not be always be identifiable but whose lives still reflect Heller's essential truth that when it comes down to the desire for one last moment we are in many ways exactly the same.

The stories, and I suppose they are stories more than essays, contained within "One Last Lunch" are glimpses into people that we've known and loved who were loved and yet who also had quirks, foibles, flaws, and even darker sides. The stories reveal the truths about relationships, yet they're equally as revealing about the impact of time on grief, the power of gratitude, the weight of regret, and just how much love endures even when our hearts and minds are left to make sense of the senseless.

The stories range from nostalgic to humorous, eloquently written to incredibly raw. The stories reveal themselves in a variety of creative ways that are best left unrevealed here. Suffice it to say that each writer created their lunch in a way that complemented their abilities as a writer and their relationship with the person to be remembered. At times, I would laugh out loud as I turned a page and realized what was to come next.

Other times, I would be rather overwhelmed with the poignancy of it all.

The stories that connect with the reader will be individually determined. In "One Last Lunch," there are no "best" and "worst" stories only stories that resonate most deeply within. In my own experiences with grief and loss and longing, grief that includes the loss of a wife and child at far too young an age, I found myself most connecting with stories that made me laugh a little or cry a little or that seemed almost impossibly vulnerable in their presence.

There are other stories that wax so nostalgically that I practically envisioned them as Wes Anderson movies fully realized. I rather loved them.

I resonated less, I suppose, with stories unfolding almost theatrically. They felt overly staged to me, but there's little doubt they will resonate deeply with others. I also resonated less with those stories based upon more casual relationships or those relationships that feel less "lived in."

Clarence Majors reflecting upon lunch with longtime friend James Baldwin took me into a world I've never experienced myself yet could instantly visualize, while Daniel Bellow's remarkable story about lunch with father Saul Bellow lingers in my psyche still. David Bowie's friend Carinthia West reflects with clear affection about a side of Bowie so seldom revealed to the wider public, while Kirk Douglas's simple yet powerful story about lunch with his father, Herschel "Harry" Danielovitch, is particularly meaningful given Douglas's own not so distant passing.

There are others. There are many others. Jesse Kornbluth's story is unexpectedly satisfying, a reflection about lunch with Nora Ephron about a situational "friendship" that imploded yet was largely unresolved. Phyllis Raphael's warm and affectionate tale of lunch with her young grandson Max Glezos-Chartoff left me, quite simply, in tears. RF Jurjevics's story is among my favorites in the collection, a reflection on lunch with parent Juris Jurjevics that is deep and meaningful and wondrously transparent.

Oh, how hard it is to stop sharing favorites because there's simply so many stories here from which to choose.

I embraced the near playfulness of boss Nancy Evans's story about one last lunch with Jacqueline Kennedy Onassis, while becoming completely immersed in Dahlia Lithwick's reflection about Paul Newman and Kate O'Toole's delightful story about lunch with father Peter O'Toole. I laughed, truly laughed, at comedian Richard Lewis's reflection on one more lunch, for which he would inevitably pick up the check, with comedy legend Jonathan Winters. Rain Pryor writing about her father Richard Pryor, Taja Sevelle on Prince, and daughter Anne Serling's inspired reflection on father Rod Serling are also highlights, while I'd be incredibly remiss to not mention Cameron West's emotionally raw reflection on comedian Robin Williams and Mark Vonnegut's story around my hometown favorite of Kurt Vonnegut.

There's more. I know. I know. I keep saying that. There's more, but these are truly stories and reflections and memories better to read about oneself rather than in some book review from someone you've likely never met.

"One Last Lunch: A Final Meal With Those Who Meant So Much To Us" is simultaneously emotionally satisfying and intellectually stimulating. Heller has crafted a collection of stories that could have so easily felt pretentious, yet instead feels universal and connecting. Filled with stories by writers and non-writers alike, the stories that unfold in "One Last Lunch" are filled with words longing to be expressed, emotions desperate to be understood, and years of "what ifs" floating in the air.

Erica Heller is the author of the memoir "Yossarian Slept Here," the novel "Splinters," and "300 Ways to Say No to a Man," a humor book illustrated by Seymour Chwast. She has contributed to the New York Observer, Huffington Post, and other publications. "One Last Lunch: A Final Meal With Those Who Meant So Much To Us" will be released in May 2020 by Abrams Press.
Posted by RPropes at 10:08 AM