"The Myth of the American Dream: Reflections on Affluence, Autonomy, Safety, and Power" - D.L. Mayfield 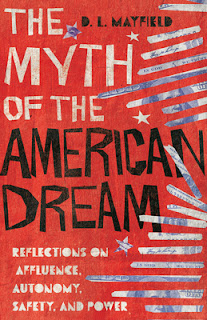 It is a weird experience to read D.L. Mayfield's "The Myth of the American Dream: Reflections on Affluence, Autonomy, Safety, and Power" while hunkered down alone in my three-bedroom home located in one of the rougher areas of Indianapolis's Eastside.

Not quite in my mid-50's, I'm a paraplegic/double amputee who has far outlived my life expectancy with spina bifida and who only recently spent 3+ months off work due to amputation of my left leg above the knee.

I work full-time. I own my home. I drive. I'm an activist here in Indianapolis in the area of violence prevention and have helped raise upwards of a million bucks for charities worldwide.

Yet, the lesson I learn time and time again in life is that I'm disposable.

A Catholic priest told my mother shortly after my birth that it was "God's will" that I die. No kidding.

I have had relationships end because I could not be the man they wanted me to be. I've, quite literally, lost body parts because mine were deemed of lesser value.

I have, I am embarrassed to admit, spent most of my life pushing myself to the point of self-harm simply trying to be "enough."

I sought the American Dream, or at least some version of it, but consistently found myself sitting in my wheelchair outside what felt like an impenetrable chain-link fence with the American Dream somewhere out of reach up some inaccessible stairway.

It should be no secret the conclusion that she reaches.

"The Myth of the American Dream" is a critique of what has become known as the American Dream and of what has become, far too often, recognized as the contemporary Christian journey. It is also, however, a critique that Mayfield turns within as she's never hesitant to turn that societal microscope on herself and to point out her own mistakes, flaws, weaknesses, and inconsistencies.

"The Myth of the American Dream" will most resonate with those who appreciate a more progressive Christian theology, though "red letter" Christians will also find much to embrace here. Those who follow a prosperity theology, think Joel Osteen, will likely reject the thoughts put forth here while others will find both food for thought and bristling conflicts.

"The Myth of the American Dream" is a weaving together of biblical teaching, personal testimony, and a probing, not particularly gently, of the systemic ways in which living the Christian life can and should conflict with attaining of affluence, autonomy, safety, and power.

Mayfield, a pastor's daughter and acclaimed author of "Assimilate or Go Home," has spent much of her adult life living within Muslim communities abroad and, more recently, working with Muslim refugees here in the U.S. Along the way, she has observed the myriad of ways in which the American dream is rigged and exclusive of those who don't fit within the majority culture. As a middle class white woman, Mayfield is acutely aware that she is both part of the problem and part of the solution.

It is a powerful experience to read "The Myth of the American Dream" in the midst of the COVID-19 pandemic that has, indeed, derailed the American dream for thousands of citizens. We are learning first-hand about the inequities of the system, some of which we knew and some which are far greater than we'd ever imagined. While I've long experienced that sense of being disposable, we're caught up now very much in this conflict between those who want to tread lightly as we learn about the virus and deal with its impact and those for whom the risk is lower and the desire to "open America" is greater.

Almost without exception, or so it seems, those supporting "opening up" are those for whom the socioeconomic system is naturally biased toward quite intentionally. Refugees are not being welcomed in order to "protect America" while those already at great risk in the U.S. are having their concerns disregarded or are simply being regarded as disposable.

"They're going to die soon anyway," we so frequently hear.

At times, I longed for Mayfield to delve deeper into the issues being presented. While she writes about those refugees seeking safety and fleeing violence or corruption or poverty, there's little time given to those who come simply seeking their own piece of what they perceive to be the "American Dream." At times, it seems like Mayfield practically idolizes the cultures of others yet fails to recognize their own flaws, weaknesses, and even those things that contributed to people fleeing their birth homes. Every culture, I would counter, struggles with the balance of some sort of "dream" and every culture struggles with affluence, autonomy, safety, and power yet Mayfield spends most of her time writing about why the American dream has become misdirected yet, somehow, the cultures from which people come are somehow preferable.

There are, of course, legitimate observations to be made. In fact, for the most part I agree with a good majority of Mayfield's conclusions. I simply wish she'd spent more time in exploring why people leave a culture that would seem to be much more theologically sound for a society that she is claiming is not. What's the difference? Even for those forced to leave due to war or violence, why do they choose the U.S.?

At times, as well, I thought the debate became somewhat muddled between whether the true concern is the American dream itself or the lack of equity to pursue it. Mayfield makes it clear that Jesus himself benefited from those who had wealth and certainly was known to party, yet there are times when "The Myth of the American Dream" seems to admonish the actual dream while later arguing that the real problem is equity in moving toward it. She confesses that the perfect community is one where everyone has the opportunity to pursue the American dream, essentially the opportunity to have enough, yet she often responds guiltily when she realizes that she has wanted or attained something more individualistic in nature as if somehow "want" is inherently bad.

I wrestled with "The Myth of the American Dream." I wrestled with it mightily and that's a terrific thing. I agreed with it. I disagreed with it. I laughed. I cried. I exclaimed. I researched. I learned. I felt admonished. I felt convicted. I looked inward. I did pretty much all the things one should do after reading a book like "The Myth of the American Dream" and I wrestle with these words still. Truthfully, I've changed my rating for the book several times even while writing this review, always vacillating between 4 and 5-stars and desperately wanting a 4.5 rating to be available because I can't help but think this is a book everyone should read precisely because it will lead to self-examination, open discussions, and lots of necessary learning.

Ultimately, "The Myth of the American Dream: Reflections on Affluence, Autonomy, Safety, and Power" is a book I loved, though it's also a book that I wished had gone deeper and a book that, at times, revealed an unacknowledged privilege from which the writer writes and shares perspectives. Nevertheless, this is a beautifully written book that I will undoubtedly read again and will undoubtedly encourage others to read. It's likely a book that will continue to inform my theological life and my own personal beliefs and practices as a "disposable" adult with a disability who both understands the oppressive nature of the socioeconomic system here in the U.S. and the ways that even within my own challenges I remain privileged by it.

"The Myth of the American Dream" will be released by InterVarsity Press on May 5th.