"The Tango Effect: Parkinson's and the Healing Power of Dance" - Kate Swindlehurst 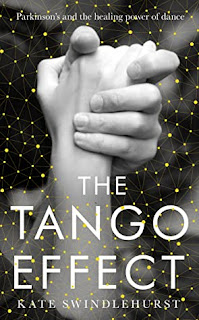 Kate Swindlehurst's "The Tango Effect: Parkinson's and the Healing Power of Dance" is so much about that healing power of dance, specifically the Argentine Tango, that there are times you forget about the ever present Parkinson's Disease.

Swindlehurst's story is her own, the Parkinson's Disease a diagnosis she acquired a little over ten years ago which ended her teaching career yet also caused a life detour into the world of writing and, yes, back into the world of Argentine Tango.

The studies around the healing power of dance are well documented; "The Tango Effect" often refers to them, an approach to her journey that is refreshing as "The Tango Effect" spends as much time stimulating the mind as it does the emotions. Yet, a good majority of "The Tango Effect" is about Swindlehurst herself and the dance that has positively impacted her life over the past 10+ years.

Recently released by crowdfunding publisher Unbound, "The Tango Effect" explores the world of Argentine tango in such a way that for more than a few pages you may find yourself asking "What have I stumbled into?"

Have patience. There's a method to Swindlehurst's writing and it's remarkably effective by book's end. By understanding the history and techniques behind the Argentine Tango, you gain a better understanding of why Argentine tango can have such a remarkably healing impact on those with Parkinson's Disease. Argentine tango is not, of course, a "cure" for Parkinson's Disease but instead a way that individuals such as Swindlehurst can help manage the ways in which the disease impacts the body and the mind.

Originally given birth as an article, "The Tango Effect" follows Swindlehurst over the course of a year as she incorporates, or rather re-incorporates given she'd had previous experience with the dance, Argentine tango into her life. It was an experiment, really. She had willing participants from a dance studio that believed in inclusivity and who were intrigued by the possibilities and, over the course of that year, the Argentine tango seemingly found its way into her psychological and physical healing regimens.

"The Tango Effect" is an unapologetically literary effort, a work of creative nonfiction that worries less about tugging one's heartstrings and more about accurately and effectively documenting Swindlehurst's journey. This doesn't mean that "The Tango Effect" has no emotional resonance. In fact, quite the opposite is true. As an American reader, however, I must confess I initially struggled with the fact that Swindlehurst, a writer from the U.K., largely avoided the American tendency to write for the emotional experience and to turn the entire affair into the next Lifetime Channel movie of the week. Instead, Swindlehurst's writing is as intelligent as it is emotionally resonant and it's clear from page one that Swindlehurst fully well intends us to understand the world into which she immersed herself including its history and the finer musical points of Argentine tango.

Once I adapted to Swindlehurst's distinct literary rhythms, I found them refreshing.

At a little over 200 pages including references and resources, "The Tango Effect" is a quick read filled with moments of genuine revelation, quiet humor, stark vulnerability, a wonderful exploration of intimacy amidst dance, and so much valuable information about Argentine tango that even this dance shy paraplegic/double amputee wheelchair user found myself intrigued by the idea of exploring the ways dance could impact my own healing and self-perception.

"The Tango Effect" is described by the author herself as "quirky" and "intimate" and, indeed, it is very much so. It's a joy watching Swindlehurst, an accomplished writer before penning this self-published title, journey toward a greater degree of self-acceptance and an absolute refusal to be defined by Parkinson's. For her, the Argentine tango becomes both companion and liberator and it's exhilarating to watch unfold over the course of Swindlehurst's year. The book beautifully explores the dance - it's history and music and its relational aspects. "The Tango Effect" explores Swindlehurst's friendships that were formed through remarkable, and very mutual, vulnerabilities and yet it does so with as much examination as emotion. "The Tango Effect" is a reminder that while disability, or at least the physical reality of our body, is very real so is our ability to live exhilarating and fulfilling lives regardless of that physical reality. It doesn't promise a "miracle cure," but instead offers light where there sometimes feels like there's only darkness.

"The Tango Effect: Parkinson's and the Healing Power of Dance" will most resonate with those with professional interests in dance, Parkinson's, and the healing power of the arts in general. Those looking for more of a touchy-feely "rah rah" story may be less engaged, but there's much hope and inspiration to be found in this engaging, satisfying title now available from Unbound.
Posted by RPropes at 6:55 AM