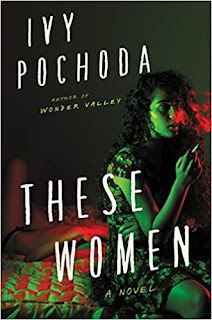 It's an especially odd experience to read Ivy Pochoda's latest mystery/thriller "These Women" as I'm hunkered down alone in my urban Indianapolis home during 2020's introduction to pandemic horror called the pandemic crisis. Thousands of Americans have already lost their loves and it's said that we've not yet reached our peak. As a nation, we're faced with deciding if "these people" matter...these people, in the case of COVID-19, being mostly the nation's elderly and medically vulnerable who are most at risk of significant health issues from COVID-19.

If we were to listen to some news channels, rescuing the nation's economy is a higher priority or, at the very least, an equal priority. For others, however, a few weeks of hunkering down and simplifying life is worth it to lessen the risk for our nation's most vulnerable citizens and the others who are most at risk of COVID-19.

For some, these are women who got what they deserved. For others, they're simply women who don't matter. They're disposable.

Ivy Pochoda, award-winning author of "Visitation Street" and "Wonder Valley," cares about these women and their voices and their life experiences.

Pochoda cares about their deaths.

There's Dorian, a rough and grizzled woman who drowns her days in a low-rent fish shack doing what she can to care about "these women" as some sort of complicated grief over her own daughter, Lecia, who was murdered 15 years ago.

There's Julianna, also known as Jujubee, a hard-living dancer with a street swagger that would seem to imply she owns these streets.

There's Essie, a former homicide detective turned vice whose investigative instincts tell her there's a pattern that no one else sees or wants to see.

Marella? She's a girl from the 'hood who lives on its fringes. A daring performance artist with provocative words and images, her latest exhibit takes her a little too close to the danger that surrounds her.

Finally, there's Anneke, a compassionate nurse with secrets inside her immersed in a world of order and structure that she fights fiercely to protect.

"These Women" begins in the past, 1999 to be exact, when the murders began but no one was really paying attention. The neighborhood was rougher then, the murders the price to be paid for living in a rougher neighborhood. No one called it "serial" because serial meant more paperwork and more attention and a whole lot more that "these women" didn't deserve.

The murders stopped after Lecia, who seemed to have nothing in common with the others other than someone left behind to grieve and a handful of loose ends no one cared to take time to notice.

Then, we move forward to 2014. The murders have started again. Once again, no one dares utter the word "serial" except for Essie, a barely 5' tall cop who looks more like a kid on a bike but who notices and listens and sees and cares.

"These Women" is crafted with a kind of beauty that has likely never been witnessed in these women's lives. Pochoda doesn't so much sympathize with them as she lives with them peacefully and gracefully. She takes these women at face value, neither softening their edges nor masking over their hard-earned character flaws or street-roughened defenses.

At nearly 500 pages, Pochoda makes sure that we spend time with these women too. She makes sure we understand their lives and sink into their life rhythms. She doesn't so much care if we "like" these women. She cares if they matter to us.

"These Women" is really a feminist mystery/thriller, a novel that insists that these women's lives mattered and that they deserved better than to have their murders tossed aside because of the life choices they made and the careers they chose or that were chosen for them by life circumstances and luck of the draw.

Dorian largely narrates the story, her long ago tragedy now relegated to history and her current mystery of dead birds showing up on her doorstep tossed aside as easily as was her daughter. She's dismissed as more than a little bit crazy, a grieving middle-aged woman who for some reason stays in the neighborhood that destroyed her life.

Pochoda also vividly gives us Essie's voice, seemingly different yet often more of the same. There's Feelia, someone we haven't even mentioned yet, who survived a similar attack but whose current life often plays out in such a way that you can't help but wonder if she really survived.

"These Women" is not a serial killer novel, though it certainly falls well within the genre of mystery/thriller. The mystery isn't just "Who killed these women?," but also "Why don't these women matter?" Pochoda wants to know and demands to know.

Truthfully, Pochoda knows and in her own special way she shames us for it as she should.

"These Women" is a slow-building and simmering mystery/thriller, perhaps too slow for some as Pochoda immerses us in these women's lives and in their neighborhood. She gives us enough to actually care about these women, but she also wisely gives us enough to understand why they've been tossed away. Your world lens will likely determine how you view these women - Pochoda knows that and she doesn't shy away from it.

"These Women" benefits from Pochoda's voice and I'd dare say it's a novel that needed to be written by a gifted, observational female writer such as Pochoda. Like many of the other detectives in "These Women," male writers would have focused the material differently and would have been at exploiting the very women they were attempting to write about. Pochoda's approach to these women is intimate yet universal, insightful yet emotionally honest and genuinely manifested.

The revelation in "These Women" unfolds surprisingly quickly, perhaps a bit too quickly for this writer, with a tonal shift and an abrupt pacing twist that feels honest in terms of storytelling yet arrives with less suspense than one expects from a mystery/thriller. This feels like less underwriting and more, perhaps, over-editing as it feels like there's a sliver of life missing from the words that would connect us, the readers, to these women and the truths that are unfolding.

However, this is a minor concern for a novel that is bold in its storytelling and fiercely devoted to the women who fill its pages and the importance of their stories and their lives. "These Women" is gritty and graceful storytelling. It offers the kind of storytelling you hope to find in your movie theaters one day, though you hope the movie is directed by a woman because the female voice is so central to this novel's success along with Pochoda's stunning, fluid writing and tension-filled dialogue.

Scheduled for a May 2020 release with HarperLuxe, an imprint of HarperCollins, "These Women" beautifully weaves together crime thriller and female empowerment into a novel that you won't want to put down from beginning to end.
Posted by RPropes at 7:36 AM