"Being Heumann: An Unrepentant Memoir of a Disability Rights Activist" - Judith Heumann with Kristen Joiner 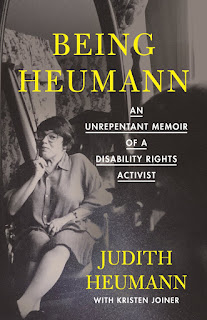 “I never wished I didn’t have a disability.” - Judith Heumann

In "Being Heumann: An Unrepentant Memoir of a Disability Rights Activist," a book Judith Heumann writes with Kristen Joiner, she begins her memoir with the above words and then spends the remainder of the book's 200+ pages living into them.

If you've never heard of Heumann, which sadly and entirely possible, Judith Heumann is an American disability rights activist recognized internationally for her groundbreaking and life-changing work. Featured most recently in the documentary "Crip Camp," Heumann's work began in the 1970's and has included serving governments, non-governmental organizations (NGOs), non-profit organizations, and a number of disability rights organizations.

Having had polio at the age of 18 months, Heumann, who is Jewish, was raised by parents with an acute awareness of the Holocaust. There was simply no way they would have ever considered following the doctor's recommendation that they institutionalize their daughter, instead providing her opportunities to grow, socialize, and learn. It would be the learning that would prove most difficult early on for Judith, whose early childhood came in the years before IDEA and well before ADA was even a thought. The local public school called her a fire hazard and refused her entry to the school, instead she spent three years receiving a mere one hour of home instruction twice a week. By the fourth grade, her mother's voice had grown louder and would demand more for Judith - eventually, she was granted entry into a special school for disabled children where, somewhat ironically, she would end up teaching for a time years later.

The school system also tried to keep her out of high school. That failed. Her childhood years at Camp Jened, the camp featured in "Crip Camp," were among her most treasured childhood memories and it would be her friends at camp who would join her in fueling the burgeoning disability rights movement.

By the time Judith Heumann entered Long Island University to study speech therapy, a choice made because Vocational Rehab wouldn't have funded her to study education since there were no disabled teachers at the time, her activist voice was growing and she began uniting both disabled and non-disabled students to demand ramps, access to dorms, and other accessibility options on campus.

Initially denied a teaching license by the Board of Education in New York City because it was believed she couldn't get her students out in case of a fire (along with other lame excuses), Heumann would end up suing for discrimination. The case just so happened to end up in the hands of the city's first black female judge and, well, you can probably figure out what happened. Judith Heumann became the first wheelchair using teacher in New York City and her work was only getting started.

From co-founding the group Disabled in Action with some of her Camp Jened friends to serving as Deputy Director for Center for Independent Living in California to having central involvement in developing the legislation that would become IDEA, Heumann was rapidly becoming a familiar face and a strong voice in the disability rights movement. However, it would be her leadership within the famous 504 Sit-In, a 28-day peaceful but passionate sit-in at the San Francisco Office of the U.S. Department of Health, Education and Welfare that would turn her into a disability rights icon. Designed to push HEW Secretary Joseph Califano to sign meaningful regulations Section 504 of the Rehabilitation Act of 1973, the event was one of several sit-ins nationwide but by far the largest and most enduring of all of them.

It was also successful.

Judith Heumann has continued to live a life of disability advocacy in roles with World Bank, Department on Disability Services, and she co-founded the World Institute on Disability. She served as Assistant Secretary of the Office of Special Education and Rehabilitation Services in the Clinton Administration and Special Advisor on Disability Rights for the US State Department under President Barack Obama. Following President Trump's election, which she laments greatly in the closing pages of the book because of the rollbacks that have occurred in disability rights, she began serving in a role with the Ford Foundation.

As magnificent a life as Heumann has lived, "Being Heumann: An Unrepentant Memoir of a Disability Rights Activist" is remarkable in its humanity. While she is, in fact, incredibly special as a human being and as an activist, Heumann possesses a perfect weaving together of confidence and humility and often prefaces her greatest achievements with the comment that in the moment she's tremendously confident but often feels anxiety and doubt both before and after such events. It helps us realize that even though our voices may quiver it is most important that we show up and use them anyway.

The early part of "Being Heumann" is fascinating in exploring Heumann's childhood and its impact on the woman that she would become. As an adult with a disability myself, I found myself drawn most to these early sections as she dealt with early discrimination, learned how to live with her disability, learned to adapt, learned how to use her voice, built a community, and became comfortable with her emotional and physical needs. As someone who still gets embarrassed to ever ask for help, I practically wept (Okay, I actually did weep) during the sections where she would work through the embarrassment of her body's more intimate needs and learn how to meet those needs and build a tribe of people who simply cared for one another in a variety of ways.

Nearly 1/3 of "Being Heumann" takes place at the 504 Sit-In. While I've long been familiar with this sit-in, Heumann adds splendid detail to it all including other groups involved, key players, and vivid memories both wonderful and definitely not so wonderful. For example, did you know that at a point went Califano had arranged for the building to be locked so that food could not be brought in that the local Black Panthers forced themselves in and would end up providing food at the sit-in every single day for the rest of the sit-in?

I honestly had no idea.

There are other little tidbits that were surprises to me, but they remain best discovered yourself by reading the book.

There were times in "Being Heumann" where I couldn't help but wish she'd expanded the breadth of her stories. For example, her marriage to Jorge at the age of 42 is given relatively little time yet for so many disabled adults the idea of dating or sex or marriage is a foreign concept. I'd have loved to have read more about this relationship.

Additionally, there are times when "Being Heumann" gets a little too bogged down in "this happened...then this happened," rather than truly exploring the actual happenings that unfolded. Having worked in two presidential administrations, both experiences are given very little attention here and that would be fascinating. Likewise, as a woman who acknowledges throughout the book the need for assistance with going to the bathroom and other personal details it would be inspiring to learn more about how that impacted her global journeys.

Details. I wanted more details. The basics, at least for this person who has spina bifida and is a double amputee/paraplegic, are far too surface to ultimately satisfy.

However, these are relatively minor quibbles for a quickly paced, fascinating book written by one of the disability rights movements most fascinating and accomplished individuals. At just over 200 pages, Heumann, along with Kristen Joiner, packs the book with a lot of information both personally and professionally and the book is as much a primer on the disability rights movement as it is a memoir. Powerfully written and, indeed, unrepentant, "Being Heumann: An Unrepentant Memoir of a Disability Rights Activist" is a must-read for everyone.
Posted by RPropes at 5:58 PM