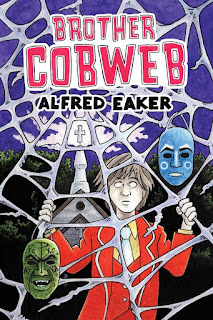 It would be easy to identify Alfred Eaker's "Brother Cobweb" as a relentlessly brutal takedown of life inside and outside a right-wing evangelical sect in Ohio known, almost laughably, as The Lighthouse.

It would be easy. Too easy.

Instead, I call "Brother Cobweb" a revolutionary love story that smothers the hypocrisy of this Midwestern Pentecostal church and rips the masks off its devastatingly familiar brand of cultish self-promotion and masturbatory spirituality disguised as something resembling a faith journey.

There will be those who are offended by Eaker's words here along with the illustration work of Todd M. Coe. You probably know who you are just by reading the book's descriptions, a description that pales in comparison to the uncompromising truths and darkly satirical spirit slinging that unfolds here with savage love and literary prowess.

"Brother Cobweb" is a fictional tale, but if you're even remotely familiar with Eaker's artistic background as a painter, filmmaker, and writer, then you won't be surprised that the novel feels like the result of a 25+ year journey for Eaker that it really is and really needs to be.

The story begins in the 1970's and centers around Calvin, who lives in the home of Nancy, the mother who pretends to love him long enough to try to save his soul, and Dale, his washabout father who pays the bills in the household but doesn't do much else to redeem his presence. Frank, his little brother, is there but somehow doesn't suffer quite as much the wrath of Nancy's distorted brand of divinity or her wicked temper.

Calvin's childhood salvation, if you will, is the presence of his great-grandfather, an atheistic Jew who doesn't have much time for Nancy's blink and you'll miss it faith journey but has all the time in the world for his beloved Calvin. Thanks to his great-grandfather, Calvin discovers art and music and a way to survive his mother's almost comically brutal blows and the increasingly demented ways of The Lighthouse. With a gift for drawing firmly in place, Calvin recognizes the caricature life in which he lives and creates what he calls "The Brother Cobweb Chronicles," a cartoonish comic of such hardcore truths that those around him can't even recognize it.

It's not surprising that even as Calvin's life unfolds, his childhood experiences won't leave him. They get worn like a second skin, a Leatherface-styled mask of familial scars and stories and self-fulfilling prophecies that keep unfolding even as he somehow survives high school, makes his way to art school, has a near-death experience, and struggles well into adulthood to squelch the impact of the warped and violent reality of his life and its perpetuating cycles.

If "Brother Cobweb" were to be nothing but Calvin's somehow surviving his childhood, it would be yet still an exhausting but exhilarating experience with uncommon insights and difficult to embrace but impossible to ignore exegesis of theology gone wildly awry.

"Brother Cobweb" is much, much more.

"Brother Cobweb" is a love story. I tell you it is. It's the love story of a God who refuses to die no matter how often those who proclaim His/Her name hold Him/Her under the baptismal waters to the point of drowning. It's the love story of a God who comes alive in the person of a battered and bruised spiritual misfit who refuses to identify as an atheist no matter how often he's betrayed by the people and the institutions and the structures who teach hate instead of love. It's the fumbling love story of this young man, Calvin, as he survives and fights to thrive and struggles to discover some semblance of what it means to give and receive love without really knowing what that means but being precisely sure what it doesn't mean.

"Brother Cobweb" isn't about the patriarchal love that is so often worshipped by the contemporary evangelical church. You could possibly say it's about the "red letter" love, though even that feels sort of incomplete in a world that so loves to piecemeal the teachings of Christ into something comfortable and familiar and safe and risk-free.

There's risk galore to be found in "Brother Cobweb" and that's a huge part of what makes the book such a wondrous read.

"Brother Cobweb" doesn't flinch in portraying the brutal realities of Calvin's life, but it also doesn't flinch in celebrating his magnificence amidst it all. The cycle of abuse and violence in which Calvin lives bruises him and batters him and scars him and tells his soul stories, but somehow he starts to figure out what love is anyway and his glorious imperfections inch toward breaking the cyclical nature of his life and chopping down that family tree.

It's nothing short of a miracle that Eaker never exploits Calvin, instead holding him up as a sacred truth that there's nothing in this imperfect life can truly define us and that if we choose wrong we can always choose again.

Those who find themselves in The Lighthouse have perpetuated their cycles, so often choosing hate instead of love and dogma over spiritual truths and anything resembling a true faith journey. Calvin, far from alone but clearly in the driver's seat, chooses love and chooses spiritual truth and chooses the vulnerable unpredictability of a faith journey and becomes more of a believer than everyone in The Lighthouse combined.

"Brother Cobweb" calls out hypocrisy and lies and bad theology and the damage that we do to one another, yet it does so with humor intact and a surprising amount of tenderness toward everyone including those who have failed and failed and failed.

If you are familiar with Eaker's works, you'll recognize pieces of his history here from BlueMahler to PinkFreud to explorations of his spirituality that can so often be found in his painting and in his remarkable cinematic work.

I've long felt a connection to Eaker's world, both as a film journalist who has reviewed his directorial efforts and as the recipient of his own review of my book "The Hallelujah Life." While our paths haven't crossed, our life experiences and spiritual journeys seem irrevocably intertwined and and almost familial in their expressions. Eaker had offered me the chance to read an advance copy of "Brother Cobweb" not long ago, yet I was busy taking yet another detour in my life as my spina bifida kicked my a** one more time and I lost another limb.

It was a brutal experience and an opportunity to learn how to give and receive love one more time.

So, instead, I picked up a copy of "Brother Cobweb" myself, drawn to the Eaker I've come to respect and admire and adore who possesses an aesthetic spirituality, an artistic curiosity, and both heart and mind that demand truth in all its brilliance and brutality.

For some, "Brother Cobweb" will be a difficult, emotionally demanding read but it is an absolute must read for those who have been wounded by faith organizations, Pentecostal and otherwise, and the flawed yet fascinating characters who fill their sanctuaries.

Published by Open Books Press, "Brother Cobweb" is available in both print and Kindle versions and is illustrated with sublime insight and wonder by Todd M. Coe.
Posted by RPropes at 6:30 PM