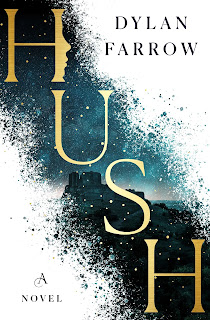 With her debut novel "Hush," Dylan Farrow becomes the latest Farrow to enter the literary world with this YA fantasy novel that is already set to be the first in a series with the second title due for release later in 2021.

"Hush" introduces us to 17-year-old Shae, an impulsive yet obviously passionate young lady from the land of Montane and, in particular, the impoverished village of Aster where she lives alongside her mother on the outskirts of the village due to an incident years earlier in which her brother, Kieran, was lost to a controversial infection known as the Blot.

When tragedy strikes again and Shae's mother is found to have been murdered with a golden dagger as the weapon, Shae's thirst for justice leads her to travel to High House, where Montane's mysterious ruler Lord Cathal resides surrounded by an equally mysterious and absolutely powerful group known as the Bards, a nearly all male group with a highly evolved gift for the sacred act of "Telling," a way of controlling both the people and the world around them with intention of language and presence.

Shae gets more than she bargained for once she arrives at High House and discovers that sometimes when we seek out the truth it reveals more than we'd ever imagined.

A longtime activist, Farrow returns to her creative roots without setting her activism aside with this fictional yet timely and relevant tale that possesses both cultural insights and serves as a powerful feminist fantasy centered around the 17-year-old Shae, who believes herself to be plagued but who is, in fact, much more gaslighted by the world that surrounds her and is, also in fact, far more gifted than many of those who are regarded as the most gifted in the land.

As the first in an intended series, "Hush" is filled to the brim with the setting of atmosphere, place, time, and circumstance. At times, there's no question this comes to the detriment of story though seldom to the detriment of character development. Told largely from the first-person perspective of Shae, "Hush" is at times overwhelmed by descriptive language that distracts from the story's overall tone and one can only hope that having set the stage for this world with "Hush" that future novels will relax more into the story itself.

It is important to remember that "Hush" is intended as a YA fantasy, a novel and series along the lines of the "Hunger Games" novels or "Divergent" series or, to a much lesser degree, even the "Harry Potter" books though the Potter books definitely skew younger. While only the ages of Shae and a secondary character, 13-year-old Imogen, are specifically noted, "Hush" is set in a medieval-tinged land with a central character who radiates youthful impulsiveness and immaturity along with a more than healthy curiosity and sarcastic wit that serves her well. "Hush" occasionally dips its literary toes into light sensuality, mostly unsuccessfully, as Shae seems to resort to physical descriptors of nearly every male that surrounds her in a way that feels unnatural and untrue to the tone of the rest of the book.

While "Hush" is occasionally hindered by tonal inconsistencies, in a very tangible way Shae's journey finding her strength and gifts seem to mirror those of Farrow finding her own literary voice and watching that come to life on the page. While "Hush" is not without its challenges, rest assured that Farrow is a gifted writer and "Hush" shows tremendous promise as a YA fantasy series.

The world that Farrow creates is incredibly visual, a cinematic optioning of the material seems inevitable if it hasn't already occurred. Farrow writes in such a way that Aster, Montane, and High House all come vividly to life and that vivid picture helps us to buy into the suspense and mystery surrounding Shae. Farrow also keeps everything age-appropriate, Shae a believable 17-year-old on the cusp of womanhood yet still seeking affirmation from those who will affirm and also from those who will exploit her. As an activist in the area of sexual violence, Farrow clearly understands boundaries and never exploits the character herself.

The characters here for the most part fit the worlds into which they are created. Young Imogen, a servant girl, is perhaps the most beautifully drawn and it's hard to imagine you will not picture her yourself. I certainly did.

Fiona, Shae's friend, is in some ways paper thin yet also easy to imagine and easy to embrace within her place in the story. Mads, the only young man in Aster seemingly interested in Shae, is like many other men we've met before in YA fantasy novels yet Farrow nicely makes him more complex and compelling.

Lord Cathal's complexity is never in doubt, the kind fatherly aura we're first introduced to an obvious mask for the story to unfold. The same is true for most of the Bards including Kennan, Ravod, Niall, and others. They are both familiar characters in a familiar fantasy yet also given their own specific distinctions.

To tell anything more would be a disservice to Farrow's work here and to the joy of the written word itself. It is difficult to rate a book such as "Hush," both a first novel yet also already known to be the first in a literary series. As a stand-alone, it would likely exist in the 3-star range yet one can easily see characters developing and worlds growing and the universe opening up to Shae and in this unfolding feminist fantasy where the written word is sacred, misusing it potentially fatal, and repressing it perhaps the gravest mistake of all.

"Hush" comes to life on October 6th from Wednesday Books, a St. Martin's Press Imprint.
Posted by RPropes at 7:14 AM