"Made Possible" - Edited by Saba Salman 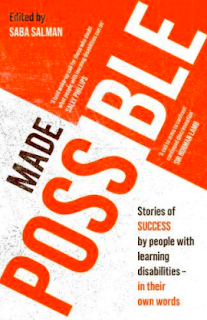 Edited by social affairs journalist Saba Salman, "Made Possible" is the latest release to come from the groundbreaking U.K. crowdfunding publisher Unbound.

The book features eight stories, testimonies really, of individuals living life with learning disabilities while having extraordinary success. It's worth noting that this U.K.-based title defines learning disability somewhat more differently than how it's defined in the U.S. as within this book learning disability includes such diagnoses as Down Syndrome and Hydrocephalus (among others) and generally indicates a major impairment in intellectual disability (an IQ of 69 or less), major impairment in adaptive functioning areas such as self-care, safety or relationships, and is generally regarded as having had a childhood onset. While at one point in the book it seemed the U.S. definition of "intellectual disability" would match, this was obviously not always the case. Thus, being aware of some differences in definition and perception is important.

"Made Possible" illuminates the possibilities for those whom society often uses the word "impossible," shattering preconceptions while also offering a glimpse inside British culture, the NHS, and how essential it is for everyone to be afforded an equitable opportunity at a quality life beginning at an early age.

The stories that unfold in "Made Possible" include:

Gavin Harding - the first learning-disabled person to be elected a mayor in the U.K and the first person with a learning disability to be employed by NHS England (where he works as a learning disability supervisor). He is a passionate opponent of institutional care, himself having experienced several years in a series of secure hospital units after having mental health difficulties in his early twenties. He was awarded an MBE (Member of the Order of the British Empire) for services to people with learning disabilities in 2014.

Matthew Hellett is an award-winning filmmaker, performer, and a drag artist from Brighton. He is the head programmer of the Oska Bright Film Festival and in 2017 introduced a groundbreaking queer strand to the festival. He is one of the first two people with a learning disability to have been accepted on to the UK film industry mentoring program called Guiding Lights. Thus far, he has made five films having been shown at festivals nationally and internationally.

Laura Broughton became the first woman with a learning disability to win a place at the Royal Academy of Arts Summer Exhibition in 2016 and is an artist-in-residence at South Bank University and has a BA in Fine Art Painting and a postgraduate diploma from the Royal Drawing School. She also has a career in social care as a consultant and trainer.

Dan Pepper is a former Paralympian and multi-award-winning elite swimmer who was appointed as a high-performance athlete ambassador for the national campaign "My Sport, My Voice!" run by the UK Sports Association for People with Learning Disability. He runs his own personal training business and still regularly takes part in outdoor endurance events around the UK.

Lizzie Emeh made history in 2009 as the first solo artist with a learning disability to release an album of her own songs to the public, "Loud and Proud." She performed at the London Paralympic Games and continues releasing new music.

Gary Bourlet is a veteran civil rights campaigner who founded Learning Disability England in 2016. Back in 1984, he launched the international disability civil rights movement People First in the U.K and over the last 30 years has set up campaign groups all over the country training people with learning disabilities in leadership roles and encouraging them to speak up for themselves. In 2018, he was awarded a lifetime fellowship at the City Literary Institute in London.

Sarah Gordy became the first woman with Down Syndrome to be awarded an MBE for services to the arts and people with disabilities. She is known for her work in BBC dramas "Upstairs, Downstairs," "Call the Midwife," and "The Silkworm." She has made appearances in ITV's "Peak Practice" and BBC's "Holby City" and "Doctors." She played the lead role in Ben Weatherill's critically acclaimed play "Jellyfish" and starred as a character without a disability in Lee Mattinson's play "Crocodiles."

Shaun Webster is a father, grandfather, and human rights campaigner who was awarded an MBE in 2015 for services to people with learning disabilities and their families. He works all over the UK and overseas as a speaker/trainer for the human rights charity CHANGE. He is the co-author of "Leaving Institutions, Voices for Change." He is also a trustee of the housing support charity KeyRing.

These people are remarkable. These people have remarkable stories that are told in first-person, their stories brought vividly to life through their own language and through Saba Salman's collaborative spirit and editorial expertise. At times, the testimonies focus almost exclusively on the fields in which they have found success. Other times, the testimonies have a greater focus on their learning disability and its impact on their lives and their paths.

The beauty of "Made Possible" is that the people themselves tell their own stories and they do so with refreshing honesty. There are frequent references to school segregation or, for those who didn't experience segregation, instances of everything from mild discrimination to outright bullying.

The NHS, or National Health Service, is referenced often in both tremendously favorably and downright awful ways. If you've ever lived with a disability, or loved someone who does, you know that budget cuts can cause havoc on needed supports and services, though nearly every person in this collection is quick to be grateful, stunningly grateful, for those who've made a difference in their life and for those organizations and institutions that have treated them well. Institutional abuses are called out unflinchingly, while recent progresses are noted with more diverse services and, of course, the NHS also hiring those with learning disabilities.

"Made Possible" is filled with inspiration and it's filled with the perspiration of those with disabilities who've fought for change and for those who've allied with them. It's an informative book, quite entertaining and alive with the power of the human spirit.

It's obvious that Salman has made an effort to showcase diverse life experiences to keep "Made Possible" feeling fresh, though certain common ground is inevitable and the overwhelming sense that many of these individuals have endured varying degrees of discrimination and even abuse is undeniable.

The film's opening essay, "Untold Success," is by Salman herself. Setting the tone for what is to come by introducing Salman's inspiration for the project, her sister Ranaa, and laying the groundwork for learning disability in the UK, this essay is informative yet one can't help but wish it had woven into its tapestry more of Ranaa's voice to remain consistent with the rest of the book. This section explains that the essays in the book focus mainly on career-related accomplishments "because professional recognition is, in general, society's most common way of measuring people's achievements." As is true for at least a couple of the other essays, the book laments recent austerity efforts negatively impacting services on the local level including those for her sister.

While the groundwork laid is quite beneficial and informative, the essay itself is simply too long and waxes too eloquently and, at times, too broadly and lacks the first-person narrative that makes the rest of the book such a work of wonder. It's a minor concern, really, but I experienced notable surprise as I headed into the essays that followed and felt an entirely different feeling and relaxed into the remainder of the book's warm, deeply personal literary vibe.

Due to be released by Unbound on May 28th, "Made Possible" will be treasured by individuals with and advocates for people with disabilities and for anyone concerned about ensuring a more equitable society where individual gifts are celebrated and empowered.
Posted by RPropes at 9:17 AM