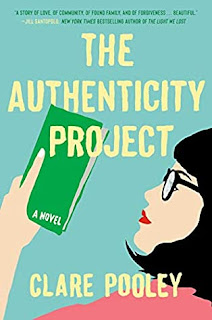 "Everybody lies about their lives. What would happen if you shared the truth?"

79-year-old Julian Jessop is an eccentric artist, once quite popular but now mostly relegated to the art history books and the sofa that sits inside the home he is being pressured to sell by others in his building who wish to profit from an extraordinary.

Julian, on the other hand, seems to have an itch for nostalgia and a yearning for connection that is somehow met by this mildewy home that he once shared with his beloved Mary.

Desperate to share something resembling the truth of himself, Julian grabs a solitary green notebook and writes within its pages the truth of his existence. It's an experiment, really, and he calls it The Authenticity Project. He leaves it in a public setting and challenges others to share their stories, as well.

Penned by literary newcomer Clare Pooley and at least loosely based upon her own life experiences resembling those of the much older Julian, "The Authenticity Project" is a light and for the most part cheery read centered around a core cast of six decidedly quirky, funny, and occasionally sad characters who take up the challenge of The Authenticity Project and over the course of Pooley's tale find themselves confronting their demons, failing, confronting again, making friends, paying it forward, finding more friends, and occasionally finding love.

Comparisons to "Eleanor Oliphant is Completely Fine" and "Love, Actually" are incredibly realistic and it's not surprising that "The Authenticity Project" has been embraced for its honest yet ultimately optimistic approach to its story. While I'll confess to having been a tad less enthused than some have been with the book, it's still one of those books that it's hard to feel even remotely negative about having read.

Julian, for example, is aging and rather lonely and seems to be living a life without the meaning it once had.

Monica left a job as a city lawyer for an idyllic cafe, yet she now worries about its profitability while also experiencing a deep desire for love and a family.

Hazard has an initial encounter with Monica that is far from pleasant, his struggles with sobriety impairing even his most fundamental social skills. Perhaps, however, there's more underneath.

There's Riley, whose story will unfold as a mystery. Then, there's also Alice, a former high-powered exec who's marriage and parenthood led her to becoming a social media influencer along the lines of a mom-blogger.

There are others. In fact, there are too many others. "The Authenticity Project" starts to suffer in the authenticity department precisely because we begin to encounter too many characters and too many stories and not enough time with some of them.

That said, "The Authenticity Project" also feels unnecessarily stretched out with a mid-section that threatens to derail its impact and lead us down a road of not particularly caring about the resolution for some particular characters. For the most part, Pooley recovers and "The Authenticity Project" ends on both cheery yet honest notes leading to friendship for some, love for one or two, and room for growth with another one or two.

While "The Authenticity Project" is quite cheery, please note that this doesn't mean it's entirely innocent. Beyond one character dealing openly with addiction, "The Authenticity Project" non-graphically also deals with sexuality and features at least one scene involving both public drunkenness and cocaine use. These things fit somewhat awkwardly within the tapestry of the book, yet despite reservations with how they're written it's refreshing to have them presented honestly among people who are also portrayed as essentially good.

Each chapter in the book evolves around one particular character, though by the time all the characters are introduced they, of course, frequently interact with each other throughout the book. There are important subjects that are given rather short attention - for example, one chapter dealing with a character's accidental outing as gay to his family and the fallout from that happening. While it's wonderful to have the book tackle difficult subjects, "The Authenticity Project" tries a bit too hard to cover a bit too much.

"The Authenticity Project" is available in both print and e-book formats.
Posted by RPropes at 6:11 PM