"Unfollow: A Journey From Hatred to Hope" - Megan Phelps-Roper 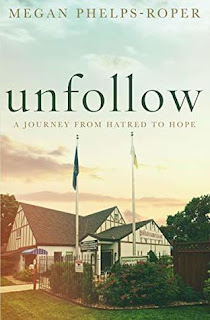 I'm not sure I was prepared for the waves of melancholy that consumed me as I read Megan Phelps-Roper's simultaneously involving, engaging, harrowing, and triggering memoir "Unfollow: A Journey From Hatred to Hope."

To be sure, my own church experiences, while dramatic, don't begin to compare to Phelps-Roper's and yet they similarly guide the life I live now and that I have lived for years.

At the age of 5, Megan began protesting homosexuality and other perceived sins and wrongs as part of a church that would, in the years to come, become known as one of America's most misunderstood and often most hated churches.

They would protest, at least it would seem, at nearly anything that would bring them attention - however, their motivations were always explained away as glorifying God. While they would certainly protest at LGBT-specific causes, they would also become known for such actions as celebrating 9/11, protesting at military funerals, protesting various celebrity events, and protesting events for which a theological connection was thin at best.

As she grew up, her beliefs firmly took hold and she was baptized into the church at age 15; her role in the church's missions would grow and her social media presence made it clear that she was a key spokesperson for Westboro.

Along the way, she would seem to identify later, she would have little doubts and questions and moral dilemmas enter her mind. She believed what she was taught by her grandfather, Westboro's pastor Fred Phelps, that the church's beliefs were absolutely right and any questioning of that was a failure on the part of the person. She believed that their actions were actions of love.

For years, hate almost seemed to be synonymous with Westboro. However, in the ways of our current culture it almost seems as if we don't even hear from them anymore. It's actually a point that Phelps-Roper makes in her book - that while Westboro may have been one of the most visible symbols of extremism in the country, they always were and still are far from the only one.

There are many, many more and we're seeing more examples of that every single day.

If you don't recognize Westboro Baptist Church, which is hard to imagine, it's the Topeka, Kansas based church that has become most associated with the phrases "God Hates Fags" and "Thank God for 9/11," both phrases you could often find on their protest signage and phrases that cause me to immediately think of Westboro anytime I hear them.

With "Unfollow," Phelps-Roper has crafted an exemplary examination of her childhood in Westboro and what it was like to grow up in a church that was populated primarily by her family and extended family that includes a large number of lawyers and she is not, in fact, the only one to have left the church. However, Phelps-Roper has also crafted a marvelous, and that's probably not the best word, exploration of what it's like for an individual to leave such a church and to give up, in essence, their entire way of life and their entire family.

Shunning doesn't really begin to describe it, though it's a good start.

Some would be surprised to realize that Fred Phelps was, at one time, quite the civil rights lawyer and very involved in the Brown v. Board of Education battle. Believing that all men were created equal, he plopped himself smack dab down into the battle against segregation.

Yet, in 1953, Phelps took over Westboro and it seemed as if everything grew into this church that would become associated with extremism. It's hard to imagine, but really necessary, that when little Megan was protesting she was doing so alongside her parents, siblings, grandparents, aunts, uncles, and so on.

I must confess that as I began reading of Megan's slow shifting that became a rather abrupt shift, I became somewhat suspicious. After all, it seems as if the primary impetus was a shift in church authority away from her family and toward a group of elders who sought to de-centralize power. They made up new rules, often inconsistent, and would then make up even newer rules to justify different actions along the way. This jarring change, which impacted her family directly and eventually Fred Phelps himself, unsettled Phelps-Roper so dramatically that she began searching for stability and for beliefs she could understand and believe in and she no longer found them in this church to which she had devoted her life.

Something had changed. As a result, she was changing.

It is not a spoiler, of course, to note that Phelps-Roper would end up leaving Westboro. That's in the title of the book and it's widely known. She would become an activist, would marry the man with whom she'd had a long, chaste, yet intentionally discreet correspondence. She is now a mother. While her sister Grace left the church with her, she's seen at least one other brother leave the church since her departure and her grandfather, Fred, was removed from the church not long before his passing and not long after he began having doubts about this beast that he openly acknowledged he had created.

The word "cult" is not really uttered in the book, though anyone with any experience with cults will undoubtedly have it cross their mind. While it's always to acknowledge that "Unfollow" is Megan Phelps-Roper's perception of the experience, it's impossible to deny that she sources her experiences extensively and provides so much exegesis of the church's scriptural interpretations and their absolute refusal to accept any questioning of it that they may even perceive "cult" as a compliment.

With so much hatred spewed back and forth on social media these days, its easy to retort "Nobody gets their mind changed on social media!." While it might be a stretch to say that Phelps-Roper changed her mind because of social media, there's little denying that the people she encountered on social media did, in fact, influence her theological explorations, doubts, searching, and her eventual decision to leave Westboro.

In some ways, "Unfollow" feels like a spiritual and psychological exorcism for Phelps-Roper, a book that at times seems bogged down by the mundane aspects of Westboro daily life and scriptural interpretation yet it feels, especially by book's end, as if this was part of how Phelps-Roper affirmed her journey as not just fleeing from a different authority or some sense of escapism but her actual discovery of a new personal theology that is now guiding her life.

"Unfollow" is intellectually stimulating and emotionally raw, a book that will trigger, most likely, those like myself who grew up in abusive church settings and who've struggled throughout life to reconcile an existing faith in God with the inexplicable actions of faith communities that hurt, abuse, separate, and divide. I couldn't help but reflect on my own childhood as a Jehovah's Witness, a path I would eventually be forced out of during the period when they covered up sexual abuse by proclaiming members as "homosexual." I also couldn't help but reflect on other experiences, including my time as a member of a local Vineyard Christian Fellowship where a suicide attempt in my early 20's led to my removal, once again, from the church that had become a home.

"Unfollow" is revelatory in the way that it shares Phelps-Roper's post-Westboro journey from time spent with a South Dakota couple, themselves Jehovah's Witnesses at the time, to eventual encounters with many of the people and groups she had protested against. You can feel in the words that she writes her sense of awe at their love and forgiveness and humility - all traits seemingly absent from the church she once loved and once called home.

At times, "Unfollow" is a cumbersome read as Phelps-Roper's cathartic exploration of life in Westboro becomes unnecessarily bogged down in details that dilute the book's emotional impact and stretch sections too thin. Toward the end, "Unfollow" vacillates somewhere between awe-inspiring and over-intellectualizing but, again, it feels constantly like Phelps-Roper needs both of these to help her make sense of her own journey. It feels like "Unfollow" is truly Phelps-Roper's journey toward remembering the love yet also truly learning how to leave the Westboro Baptist Church.

"Unfollow: A Journey From Hatred to Hope" humanizes those within the church, not to excuse or even justify their behaviors, but simply to remind us that they are, in fact, human beings. Human beings are extremists and there's something sacred and holy and necessary about realizing this over and over and over again.

"Unfollow" will also provide hope that there's a way out of this seemingly hate-filled cycle in which our society seems to find itself, a time when different theologies and political ideologies can't seem to get along and in which the desire for power often is disguised as a desire for love. With stark vulnerability and transparency, Megan Phelps-Roper has written a memorable, loving memoir that opens the door to understanding her past while illuminating her present and shining a light on her path toward an even more loving, sacred future.
Posted by RPropes at 10:10 PM