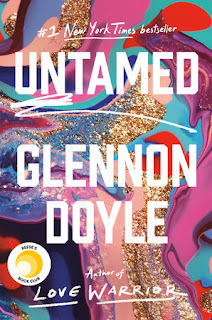 In Glennon Doyle's own words "I'm often asked why I don't publish books more often. My answer is this: I never write a new book until I've become a new woman. Over the past few years, I became a new woman. "Untamed" tells that story."

"Untamed" tells the story of that day when Doyle, preparing to speak at a conference, looked across the room and first spied the woman who would become her eventual wife - Abby Wambach. In this moment, the words "There she is!" flooded her mind and Doyle returned to her life and eventually, painfully dismantled the straw house of existence in which she had been living.

It was real. It was raw. It was painful for everyone involved. Doyle would come to realize that this attraction to Abby wasn't some divinely inspired spark but a sense of "knowing," a word she uses often throughout "Untamed," that she had, for the first time in her life, fallen truly in love. She claims it as a "knowing" that had become buried beneath her decades of numbing addictions, cultural conditioning, and even her institutional allegiances including an evangelical Christian world that would, at least for the most part, abandon her when she finally announced her relationship to the world.

The truth is, according to Glennon, that she'd been abandoning herself for years and for the first time she stopped. In May 2017, she married Abby and the two now share parenting responsibilities for her three children with ex-husband Craig Melton, whose grace in forgiving Glennon and moving forward constructively is acknowledged throughout the book and with whom Glennon continues to share an uncommonly amicable co-parenting, extraordinarily friendly relationship.

There were moments in "Untamed" when I surrendered myself to the world that Glennon was creating and is creating and I laughed, I cried, I was inspired, and I believed in her journey.

There were also moments in "Untamed," however, when it felt like she was controlling the narrative and the book's occasional raging inconsistencies came storming to the forefront in a way that made it seem like a "Do what I say, not what I do" kind of literary experience.

In the early pages of "Untamed," Doyle essentially acknowledges that a healthy portion of her best-selling "Love Warrior" was a false narrative. You can't be a warrior for a love that doesn't exist. While Doyle may have been fighting to save her marriage and family, she was abandoning herself and living into what she perceived as the world's expectations of her as a female and for her family. "Love Warrior," which I'd uneasily rated a 5-star read despite having issues with its central messaging, was released amidst Doyle's own tremendous reservations and her ever-increasing awareness that while she was going through the motions of marriage she was, in some way, in love with someone else. She acknowledges questioning whether she could actually go forward with promoting a book that was, for her, already no longer a true reflection of herself.

"We can do hard things." At least for this writer, it also feels like "We can do false things." Fortunately, and much to Doyle's credit, she eventually reverses this false narrative and takes almost unfathomable ownership of her life. She basically blows up the false narrative, subsequently risking losing favor with many of her readers and, more importantly, risking the welfare of children whom we've learned from our earliest days with Glennon Doyle are central to her existence.

I can't help but think that "Untamed" needed to start from the beginning of Doyle's changing narrative, though some would say her beautifully written cheetah story accomplishes many of the same goals.

Doyle spent much of "Love Warrior" talking about Craig's cheating. She spends much of "Untamed" either talking about or referencing that same cheating and its influence on her, her family, and those expectations that she still somehow be the "good" woman.

Yet, Doyle never references her own variation on the "cheating" story arc. While Doyle may not have consummated her physical relationship, she clearly identifies an emotional affair and subsequent conversation with Craig in which she announces her intent to leave the marriage and specifically names Abby.

Why were Craig's actions "cheating" yet Glennon's actions "abandoning the world's expectations?"

This is not meant to judge either one, but instead to propose that one of the areas where "Untamed" falls short is in examining the more complex narratives at work here. What if both Craig and Glennon were in a marriage that never should have been and sought answers and relief and satisfaction in different ways? What if they both made really poor choices for noble yet misguided reasons? What if both actually abandoned themselves trying to portray false narratives? Doyle hints at this late in "Untamed," but never delves deeper and really explores it.

What if they were both wrong yet also both right? This is not an endorsement of cheating, but an acknowledgement that "cheating" in many relationships is symbolic of bigger issues going on.

While Doyle likes to broad stroke the use of "we" throughout "Untamed" in proclaiming what is true for women, the truth is that women can't be simplified into a collective "we." There are women who will identify with "Untamed" and there are women also reading it shaking their heads screaming out "You idiot! Why would you even think about staying?" Cheating is cyclical as are many of the vices that Doyle writes about in "Untamed" and that have followed her throughout her life. At times, "Untamed" doesn't so much read like a woman who's suddenly living "wild" as it reads like a wounded soul realizing that old coping skills and old cycles and old voices are no longer serving her well. I would even argue that "Untamed" finds Doyle fumbling her way toward an honest life where she can show up "as is" and can love whomever the hell she wants.

Maya Angelou once said "Do the best you can until you know better. Then when you know better, do better." Glennon Doyle knows herself better now. It's that thing she calls "The Knowing" and she's learned that she can trust her "knowing" and she's leaning into that trust more frequently and more passionately. When "Untamed" captures this journey, a vulnerable journey toward trusting that knowing, it's nearly a masterpiece of self-help literature.

But, "Untamed" also struggles with that voice and occasionally fumbles that inner narrative. It occasionally feels like the first half of the final film in the Harry Potter series - an entertaining but not entirely satisfying effort that doesn't tell us much we didn't already know and leaves gaping holes of unanswered questions.

The truth is I cried within the first four pages of "Untamed." It's also true that within the first 25 pages, I rolled my eyes at Doyle's waxing eloquently using dialogue I'm sure plays well in her memory but has only ever been muttered in BBC television.

Both can exist. Life is imperfect and that's part of the groovy glory.

At times, Doyle comes off as absurdly unhealthy. As portrayed in "Untamed," her friendship with Liz Gilbert feels incredibly one-sided while even her relationship with Abby is often portrayed as Abby having the patience and wisdom despite the declaration that it's Doyle herself who is "untamed."

Yet, again, there are moments when a different Doyle rises to the surface and you feel her passion and commitment and clarity and her simply being the Glennon Doyle that her fans and readers fell in love with years ago. It's here. It's definitely here, but it's kind of like a baby giraffe learning how to stand up and walk and doing so with a hilarious wobble and a lack of certainty.

You can feel Doyle wrestling with her narrative throughout "Untamed." In describing what feels like a resistance to one fan's mistakenly lamenting she couldn't be accepted the way she's always been, Doyle seems to do a literary recoil and wonders aloud why she simply can't choose who she loves without having a label attached to it? Rather than wearing the label of LGBTQ, she identifies her relationship with Abby as a same-gender relationship and wants to own it as her choice to love who she loves. Yet, again, this feels conflicted with someone who will loudly proclaim the cultural factors and institutional biases that created "expectations of her."
These factors, while important and difficult to address depending upon one's life, still involve "choices." At times, Doyle is quick to judge those who succumb to societal expectations but fails to acknowledge that people can, in fact, choose to live however they want to live.

"Untamed" can be wildly uneven with short, blog-like essays that don't go anywhere yet also remarkable essays that feel like a gut-punch. The book's final 50 pages or so feel as if Doyle herself was processing throughout the book and finally started putting those puzzle pieces together. They're completely riveting.

My opinions could easily be dismissed as "Untamed" is clearly, moreso than her first two books, written for women. As a disabled adult male, there is much in the book with which to identify as I've most certainly lived a life influenced by institutional limitations, cultural biases, often legal limitations (there are still states in the U.S. where I can be prevented from marrying or even having sex), and a variety of other factors that threaten to reduce my potential and define my existence.

I chose differently, yet much like Doyle did so slowly and later in life and fumbling around like that wobbly giraffe - a particularly funny point when you also realize I don't even have feet.

There's a point in "Untamed" when Doyle acknowledges that Liz Gilbert had read an early draft and proclaimed that there was something wild trying to get out and it wasn't there yet.

I would argue it's still not there. "Untamed" isn't so much about Doyle being untamed as it is about Doyle learning how to become untamed. It's the inconsistent, uneven, and occasionally unsatisfying initial steps in her journey toward self-realization and self-nurture. It's bold and brave precisely because it's imperfect and because it takes a willingness to be transparent and vulnerable to keep showing up in the richness of one's humanity.

Intimate and fierce, "Untamed" is currently available from Dial Press.
Posted by RPropes at 8:05 AM