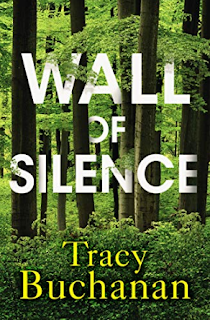 Tracy Buchanan's "Wall of Silence" centers around Melissa Byatt, a seemingly idyllic wife living in the seemingly idyllic town of Forest Grove with her husband, Patrick, along with her 15-year-old Twins Lewis and Lilly and their 10-year-old sister Grace.

Of course, it seems like the first rule of a mystery/thriller is that if something seems idyllic it usually isn't idyllic and such seems to be the case with life in Forest Grove and life within the Byatt family. We're only a few pages into "Wall of Silence" when any sense of utopia implodes as Melissa returns home from a bike ride to find her seriously wounded husband having been stabbed while all three children stand around him with an unusually calm demeanor.

It's obvious, and also strongly implied in the book's opening pages, that one of the children has committed the crime. It's also obvious that they're determined to cover for one another, however, what's not so obvious is what motive any of the three would have and, in turn, how Melissa will end up responding to her sneaking suspicions.

"Wall of Silence" is an unusual beast of a film, a book that starts off rather slowly as the mystery gets set and characters get introduced before detouring into the slow peeling away of long-held small-town secrets and toxic family dynamics and finally settling in for what is ultimately an incredibly rapid-fire, satisfying conclusion that largely redeems some of the novel's early missteps and awkward storytelling elements.

The end result is an occasionally maddening, occasionally compelling story that leans more into mystery than thriller and requires a certain suspension of belief in order to become fully immersed in the story.

Melissa is an intriguing character. Having risen, at least somewhat, out of a traumatic childhood, she's built a good life with a man considered to be one of the town's true catches. He's attractive, successful, and set to run for what is called the "parish councillor," a quick reminder that the book is set in the U.K. and some of the terminology may throw off American readers. However, because Buchanan serves up a fairly significant reveal early on, some of the intrigue and some of the involvement of the secondary characters seems questionable beyond proving the excessive toxicity of the small town.

I mean, seriously, it gets pretty weird.

Melissa makes a choice very early on that won't be revealed here - in some ways, it's a reasonable choice and it's affirmed on multiple occasions in the book. However, it's also accompanied by so much of her inner dialogue that it becomes increasingly difficult to accept.

The three children seem tailor-made for an indie horror film, though by book's end you'll understand their behaviors and their unity. Additionally, while Melissa may drive you nuts throughout most of the book you'll ultimately understand her behaviors to a certain degree by the end of the book.

While certainly narrative choices get redeemed, other choices are hit-and-miss. An ongoing attempt to feature the townsfolk chatting away in a private Facebook group, think something like the NextDoor app here in the U.S., feels contrived and has a weird design in the Kindle version that makes it less effective. Additionally, exposition at times gets so detailed that simple points go on much longer than ever needed. This is a 338-page book that would have been just as meaningful and more suspenseful with tighter editing and a 250-page length.

As secrets become revealed, there's an almost absurd darkness to the entire story. Again, there's a very cinematic quality to it all but it becomes increasingly difficult to accept that Melissa would not only make her early choices but then would be so incredibly ignorant of the world around here. While it's partly revealed as a response to complicated grief, it's still a difficult, difficult swallow.

However, something almost magical happens in the book's final 20%. Story lines start to intersect, character motivations crossover, and the mystery starts to be revealed. While the basis fact, whodunnit, isn't a particular surprise, the motivation for doing so is a bit of a surprise unless you're paying attention. Ultimately, the final 20% of the book is fast-paced, engaging, and incredibly satisfying except for one final Facebook conversation that practically kills that momentum but is mercifully short.

"Wall of Silence" is an intriguing concept for a story that wrestles with small town toxicity, toxic masculinity, the cyclical nature of trauma, disability, and how the stories that we tell ourselves can perpetuate themselves. American readers should be aware that the U.K. setting does factor into cultural references, terminology, and linguistics, while the book's structure strengthens as the story unfolds and is at its best in the book's final quarter.

"Wall of Silence" is currently available in both print and Kindle versions.
Posted by RPropes at 3:44 PM