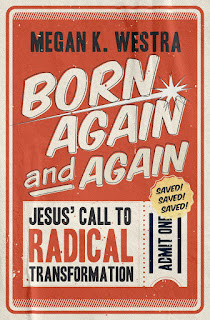 There's little denying that I follow what would be considered a more progressive theology, a fact that likely explains why I didn't necessarily find first-time author Megan K. Westra's "Born Again and Again: Jesus' Call to Radical Transformation" to be that particularly radical.

There will be those who disagree.

There will be those, gratefully, who will read the words of "Born Again and Again" and a light bulb will go off inside and an "Aha!" moment will follow that leads to, one can hope, changes in both beliefs and practices along the faith journey.

For most who've lived into a more progressive theology, however, "Born Again and Again" will likely read like more of the same with one huge and incredibly important exception - Westra takes the time to deeply explore the scriptural basis for this "radical transformation" and puts a good majority of it into historical context.

Westra is on the pastoral staff team at Milwaukee's Transformation City Church, a multi-ethnic non-denominational church that began in the fall of 2007 with a basic question - "What can the church be?"

Indeed, that question seems to be at the core of "Born Again and Again," a book that calls us into connection over consumption and challenges Christians to turn off all the things we expect being "saved" to get us - a good job, a spouse, happiness, a life of comfort, some sense of authority - and settle into the idea that all we're supposed to truly "get" is Jesus.

What if Christianity isn't about possessing but about renouncing, Westra asks? What if we are called not to treat salvation as one more thing to acquire but to conform to Christ?

Where "Born Again and Again" excels is in Westra's scriptural and historical explorations of how a religion birthed on the margins of the Roman Empire became functionally the "official" religion of contemporary society's largest military superpower. Christianity has, in essence, gone from the fringes of society to a dominating presence and "Born Again and Again," at its core, questions whether that domination is really what Christ intended for our lives.

Hint. He didn't, at least not if you believe those red letters.

The doctrine that has resulted all too often has led to planet-killing lifestyles, civil religion, domination over the very types of people Jesus spent most of his time with, and the doctrine of discovery.

Jesus gave up everything to come to humanity; humanity, all too often, seeks to acquire everything when coming to Jesus.

Westra's basic argument in this 226-page manifesto of transformation is that conforming to Christ radically reorients our lives, priorities, and faith away from this dominating mode of acquisition and into a pattern of discipleship that sets us free from fear-based consumption of people, places, and things and releases us into radically transforming possibilities for connection and true belonging within a community of God's people.

"Born Again and Again" explores salvation, Westra's own and the cultural understanding of what salvation has been and what it has become over the years. Westra challenges us to expand our view of salvation before transitioning into what is really a series of essays illustrating the ways that Christianity has spiraled into a consumption-oriented faith rather than the connecting, transforming faith it is intended to be. Exploring such topics as politics, finances, abuse/violence, the roles of women, racial justice, and ending toward the sacredness of Communion, "Born Again and Again" is a consistent and structured exploration of each topic along with a brief but pointed exegesis of scripture and exploration of applicability personally and universally.

Westra's work here is most transforming when exploring how salvation has in some ways been hijacked over the years into its acquisition mode that often contradicts its intent. For much of her book, Westra weaves this transforming tapestry into her words and beautifully balances theology and practicality of daily Christian living. At times, however, "Born Again and Again" settles into a talking point comfort zone, most obviously when discussing both financial concerns and social justice concerns, and "Born Again and Again" dances a little close to conflict with its own central tenet.

In other words, on fortunately rare occasions it feels like "radical transformation" becomes yet another theological "thing" to acquire rather than a fluid and natural result of salvation allowing us to deepen our relationship with Christ and with each other.

It should be stressed, however, that this is a minor concern in a book that is both inspiring and educational as Westra, perhaps more than a good majority of Christian authors, doesn't simply call readers into a transforming faith but reinforces through analysis of scripture and historical research why this is what has been intended all along.

An exciting and inspirational author who is already popular as a speaker, Megan K. Westra makes her literary debut with a book that arrives at an opportunity time in America as COVID-19 has transformed the way we do church and passionate cries for social justice are echoing at decibels heard before but not being ignored for the first time in years.

"Born Again and Again: Jesus' Call to Radical Transformation" is scheduled for release on August 11, 2020 by Herald Press.
Posted by RPropes at 5:58 AM