"But What I Really Want to Do Is Direct: Lessons From a Life Behind the Camera" - Ken Kwapis 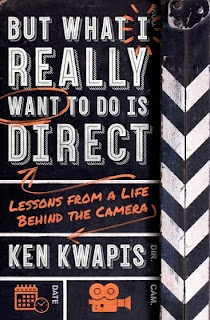 If you're like most Americans, you find yourself plopping yourself in your local cinema without much thought about "who" actually made the film you're about to see.

You simply want to be entertained.

Or, perhaps, you sit down with your family to watch a beloved sitcom or hour-long drama that will make you laugh or cry or change your life. The odds are fairly strong you don't find yourself wondering "Who directed that?"

The truth is, and I believe that Ken Kwapis would begrudgingly accept this notion, that if you're like most Americans you've likely never heard the name Ken Kwapis and if you have it's more likely a passing reference or, just maybe, it's because one of those films that entertained you became one of your favorites and you definitely know that Kwapis directed it.

Despite having a directorial career that has spanned nearly 40 years, Ken Kwapis is not quite a household name. Despite the fact that Kwapis won an Emmy Award for directing the American version of "The Office" and has been nominated for two other Emmy Awards for directing both "The Office" and "Malcolm in the Middle," Ken Kwapis is still the kind of director who has to interview for every project he works on and whose name often triggers a response of "Do I know anything he's done?"

Well, as a matter of fact you do.

While he mildly pokes fun of himself for his early career helming of Sesame Street's "Follow That Bird," a film that is much better than you might ever expect, Kwapis has directed a slew of memorable film and television projects ranging from the cult favorite "The Sisterhood of the Traveling Pants" to the family film "Dunston Checks In," again a film much better than you might remember, to "He's Just Not That Into You" and others like Robin Williams's "License to Wed," the wonderful "Big Miracle," the under-appreciated "A Walk in the Woods," and the vastly underrated late 80's film "Vibes" among others.

You may not know the Illinois native's name, but you know Ken Kwapis's work.

"But What I Really Want to Do Is Direct: Lessons From a Life Behind the Camera" is a sublime reading experience, a warm and witty and well-informed and genuinely immersive and entertaining experience that is partly autobiographical and partly a behind-the-scenes instructional journey through Hollywood, filmmaking, creative expression, and even life itself.

"But What I Really Want to Do Is Direct" is one of the best filmmaking-centered literary efforts I've had the pleasure of reading in quite some time, an unabashedly joy-filled trip through Kwapis's simultaneously ordinary and extraordinary cinematic life with triumphs, faceplants, not quite literal brawls with Hollywood brass, bouts with oversized egos, budget constraints and, through it all, the unabashed joy you can tell he experiences every time the phone rings and another directorial opportunity presents itself.

Kwapis loves directing. You can feel that love in every single word of this book, from his amazing and precise reflections from throughout film history on the various aspects of filmmaking to the generous, giving spirit that infuses his little tidbits of instruction about everything from lensing to music to intention and so much more.

Have I mentioned that I loved this book?

Larry Wilmore observed about Kwapis that “'Action!' is what most directors bark out to begin a scene. But Ken Kwapis starts by gently intoning the words 'Go ahead…' That simple suggestion assures everyone they’re in smart, capable, humble hands." Indeed, it's that sense of "Go ahead..." that weaves itself into the tapestry of "But What I Really Want to Do Is Direct." Almost universally beloved by those who work with him because of the safe and affirming sets he fosters, Kwapis has written an effort here that has inspired me as a film journalist (Really!) and inspired me as a human being as he shares his ideas about empowering both cast and crew and offering feedback that is more collaborative in spirit.

At times, you will marvel at Kwapis's ability to precisely communicate the most specific details about films past and present to illustrate points about cinematography or being proactive on set or giving playable notes or designing a fluid master.

Don't know what I'm talking about? You will by the end of "But What I Really Want to Do Is Direct" and you'll enjoy the journey of learning.

This is a book that's often hilarious, occasionally poignant, frequently inspiring, and then there's that joy again. It's filled with such a joy that even when you're reading about movie history you'll have a smile on your face the entire time.

"Playable Notes" is, most likely, my favorite chapter as it's so incredibly applicable to life itself. It made me think about how I write my own reviews, both book and film, and kind of made me fall in love with Kwapis as a human being.

That may be one more of the most amazing things about "But What I Really Want to Do Is Direct"...Kwapis writes so naturally and with such personal transparency that you feel like you're getting the genuine Ken Kwapis and you feel like this is someone you'd really enjoying hanging out with sometime. As someone who has interviewed quite a few film-connected human beings, sometimes that's an amazing experience and sometimes, well, it's not. Kwapis waltzed his way onto my desired interview list precisely because this is a book that lets you know he's intelligent, kind, funny, open, and generous in spirit.

While those with limited film/television world may at times get a bit lost inside the terminology contained within "But What I Really Want to Do Is Direct," Kwapis keeps it all so relatable and entertaining that he makes the material accessible and for the most part understandable even if you've never said anything else about a film but "Hey, I really like that movie."

There's a place for you here.

Scheduled for an October 6th release from St. Martin's Press, "But What I Really Want to Do Is Direct: Lessons from a Life Behind the Camera" is an engaging and entertaining journey through the directorial life of Ken Kwapis and the lessons he's learned along the way. For anyone who celebrates the creative spirit and yearns to bring it to life, Kwapis has crafted one of the year's most passionate and joy-filled calls to creative action.
Posted by RPropes at 11:02 PM