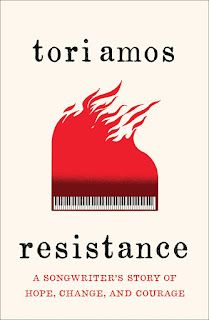 There are certain life experiences that change you.

They penetrate their way into your bones and they seem to have a way of guiding your existence, quite often for the rest of your life.

In Tori Amos's own language, they become your muse.

They're out there. Waiting.

I will always remember sitting front row inside the Vogue Nightclub in Indianapolis, an early-career Tori Amos sitting alone at her piano. "Little Earthquakes" had just come out.

I was early in my healing journey from sexual abuse as a child and a sexual assault as an adult, a young disabled adult male who had already outlived my life expectancy with spina bifida yet who was fumbling my way unsure and unclear and unable to communicate the immense darkness I felt inside. Tori Amos's "Silent All These Years" was already moving toward the charts, but I knew that the stark, remarkable "Me and a Gun" was a voice of defiance and resilience and I prayed to the God that I believed in that she would have the courage to sing this song so that I could see how she had the courage to share an experience I was struggling to share.

It was one of the few times in my life I've ever sat in the front row of a show. Being in a wheelchair, front rows are seldom an option but for whatever reason it became an option for this one night.

I'm 54-years-old now. I practically grew up with Tori Amos's artistry and activism and mind and heart by my side. If I were to make a short list of my top five concerts of all this time, this relatively small nightclub show would easily be on that list and Tori Amos's face when she sang the opening note of the A capella "Me and a Gun" would become a concert moment that would guide my own healing journey and my own ability to give voice to what I perceived to be the dark little voices inside my head that were desperately seeking permission to live and breathe and weep and laugh and become part of my existence.

I thought about that night at the Vogue quite often while reading "Resistance: A Songwriter's Story of Hope, Change, and Courage," Amos's courageous and extraordinary literary journey that will unquestionably please most Amos fans and especially those Amos fans who tap into the intimate corners of Amos's musical journey and who click with her rhythmic vulnerabilities.

The truth is that I've never always quite "gotten" Amos. My slightly autistic mind tends to lean toward the concrete, my ability to receive abstract and mystical messages limited by a cognitive filter that gets clogged up by societal pollution.

But, I always get Amos's rhythm. I always get her presence. I remember sitting front row at the Vogue and being fully aware that even then Amos had a remarkable ability to read her audience, intuitively and courageously responding to their needs while also protectively honoring her own.

I don't know if Amos saw me that evening, though I instinctively believe she saw everyone. I didn't meet her. I didn't stay after the show. While she must've had a supporting band, truthfully I don't remember them at all.

I remember the world that she created with her words and her music and her presence. I remember buying "Little Earthquakes" and every release to follow, something I've only ever done with one other artist (John Hiatt).

That world. Those worlds. They come to life in "Resistance." This book, which is structured in such a way that it feels like Tori Amos, simultaneously vulnerable and mystical and musical and poetic, is indeed a story of hope, change, and courage from Amos's early days of setting aside her first and only dismaying album "Y Kant Tori Read" to the courage of releasing music recounting life's most aching and vulnerable experiences to the strengthening of a woman who would become one of music's most passionate purveyors of politically intuitive yet socially insightful music.

If you don't "get" Tori Amos, "Resistance" is probably not the book that will make that happen. If you've never felt that rhythm and lost yourself in the world she creates then "Resistance" may likely feel like more Amos mumble jumble with mystical language that never creeps into your brain.

However, there's an exception.

If you're an artist who has struggled with finding your true voice artistically then "Resistance" may very well be a book that helps you get there. Amos practically puts a picture frame around each chapter with one of her lyrics, from the remarkable "Scarlet's Walk" to "Silent All These Years" to a host of others and then proceeds to weave those lyrics into her personal and professional journey.

At times, the lyrics seem obviously woven into the tapestry of her life. Other times, the muses have spoken and Amos's life has created this music that is needed by her, by her fans, and by the universe.

Despite my connection to Tori Amos's music, the truth is it's always been more of an empowering connection than an emotionally resonant one. As intimately as "Little Earthquakes" worked its way into my life, it was never an album that brought me to tears and even as I sat in the Vogue Nightclub watching Amos perform it was more about my voice finding a path than it was any sort of cathartic experience.

I didn't expect to emotionally connect with "Resistance," but that's exactly what happened. It felt intimate and the tears flowed, surprisingly often, and I felt Amos's lyrics and her journey with remarkable clarity.

The truth is that while I've loved each of Amos's album in its own special way, I've never again connected with an Amos release like I did with "Little Earthquakes." It was the perfect album at the perfect time in my life. It became my musical Bukowski or my musical John Callahan, a unique voice that helped me give myself permission to my own life experiences from growing up with disability to sexual assault to my wife's death by suicide and my newborn daughter's death by my wife. It helped me make sense of life traumas and, perhaps more importantly, to use my creativity to take back my voice and to give myself love over and over and over again.

"Resistance" brings these things to life. "Resistance" gives voice to Amos's lyrics and to Amos's own artistic journey and her soulful and spirit-filled personal journey that was influenced in undeniable ways by her childhood yet became something even grander and more extraordinary.

It's been right about 30 years ago that Amos's "Little Earthquakes" helped me strip away the facade and get to the core of my artistry as a writer, a poet, an occasional actor, a passionate activist, and someone who believed that creativity could change the world. Since then, I've loved and lost and somehow still survived spina bifida. I've written one book with another on the way. I've produced books and CD's and DVD's and comedy and even two short films. I've traveled over 6,000 miles by wheelchair telling stories about hope, change, and courage.

Now, here we are again. My life has been changing as of late. I recently lost the rest of my left leg and declared the end to a 30-year journey with an event I started bringing voice to victims of violence because my body simply can't handle the demand anymore.

I just spent three months of my life healing from limb loss and searching for my artistic and activist voice once again.

"Resistance" comes into my life and with clarity and purpose and vulnerability and strength, Amos once again creates a work of wonder that influences me on a profound level and helps me once again remove the mask of inability and fear and to trust my own muses and the voice inside me that has never, not once, ever let me down.

"Resistance: A Songwriter's Story of Hope, Change, and Courage" is currently available from Atria Books.
Posted by RPropes at 5:48 AM