"Sabbath as Resistance: Saying No to the Culture of Now" - Walter Brueggemann 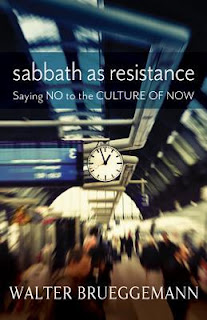 I sit here in my home on a Wednesday evening. It's my third month of working from home during the current COVID-19 pandemic, a pandemic that immediately followed my over three-month stint at home following limb amputation in late November 2019.

I worked two hours over this evening, a frequent occurrence as I work from home and have easy access to my work computer and the network that used to be unavailable anywhere but my office.

On one hand, it feels like I rest but I can't help but wonder "Do I really rest?"

Or do I just work in different ways?

Walter Brueggemann has long been considered one of contemporary theology's most trusted voices on Old Testament.

At a mere 90 pages, "Sabbath as Resistance, New Edition with Study Guide: Saying No to the Culture of Now" is a breezy, informative, and well researched read and easily one of Brueggemann's more accessible works to the wider Christian audience. A Columbia Theological Seminary professor, Brueggemann is an intellectual and would likely be unable to shut off that part of his identity even if he were to try. "Sabbath as Resistance" began as a Bible Study series, a fact that adds depth to this new edition that includes a six-week study guide that tackles each of the six primary chapters contained within the book.

"Sabbath as Resistance" kicks off with a relatively brief preface by Brueggemann that is followed by six chapters exploring Sabbath through the lenses of the first commandment, anxiety, coercion, exclusivism, multi-tasking, and the tenth commandment.

Each chapter is relatively brief yet packed to the brim with Brueggemann's exegesis, initially bouncing off the work of Michael Fishbane and establishing early on that Sabbath is “resistance because it is a visible insistence that our lives are not defined by the production and consumption of commodity goods.” This is a point he revisits often throughout "Sabbath as Resistance," though I suppose that makes sense given it's the actual title of the book.

While Brueggemann certainly explores his subject well, there's an undercurrent of anti-market economics that permeates the book's literary tapestry. Some will undoubtedly embrace this, essentially an argument that, at least for me, felt only partially true as it seemed to negate the very individual faith that it purported to call into responsibility.

I'm also writing this review during a time in our society when "Black Lives Matter" is at the forefront and social justice issues are being passionately discussed. Institutional racism is being challenged and systemic concerns being protested. Brueggemann is undoubtedly correct, one could easily say, that the "system" itself is what is to be resisted and that Jesus himself represented and lived into a different way of doing life.

Yet, where "Sabbath as Resistance" falls short is in calling us all into a more disciplined accountability ourselves as individuals and as Christians. While systemic reform is called for, so too is our own individual responsibility to practice Sabbath even if the system itself does not encourage us to do so.

Jesus didn't actually change the system, but set himself apart from it. While this makes its way into Brueggemann's writing at times, more often than not he rails against the system rather than our adhering to it.

Brueggemann's ability to tie Sabbath into the ten commandments is engaging and essential. The chapter on the fourth commandment, in particular, is quite strong and immersive while the section on anxiety that follows is equally powerful. There's little denying, at least for those familiar with scripture, that Brueggemann's argument that Sabbath is an essential spiritual discipline is valid and supported theologically. However, "Sabbath as Resistance" spends too much time in its systemic passions and not enough time applying the discussion to contemporary Christian living and exactly how one can lean into Sabbath in a system that seemingly discourages it at every turn of our lives.

While "Sabbath as Resistance" is at least partially a theological mixed bag, rest assured that in such a short book that Brueggemann hits hard and fast in celebrating the rich tradition and history of Sabbath.

It is a mark of a valuable resource on the Christian life that by the end of "Sabbath as Resistance" that I had prayerfully acknowledged those areas where I violated and continue to violate Sabbath and that I could, perhaps more importantly, recognize how these ways were negatively impacting my faith journey. While I may have wished for a tad more out of "Sabbath as Resistance," it's rather refreshing that Brueggemann avoided legalistic arguments and focused on the broader issues.

Brueggemann, rather succinctly, lays out very clear ways that we can more greatly honor Sabbath and free ourselves from our own individualized and corporate worlds of production, consumption, performance, and distraction:

While "Sabbath as Resistance" may still be a challenging read for those unfamiliar with theological terminology, the book is easily one of Brueggemann's more accessible works and while I may have found myself in disagreement with certain aspects of Brueggemann's argument that felt overly generalized and based upon assumptions, "Sabbath as Resistance" sent me into prayer, contemplation, reflection, learning, and, yes, Sabbath.

"Sabbath as Resistance" is available now in both print and Kindle versions.
Posted by RPropes at 9:27 PM

Email ThisBlogThis!Share to TwitterShare to FacebookShare to Pinterest
Labels: Religion/Spirituality