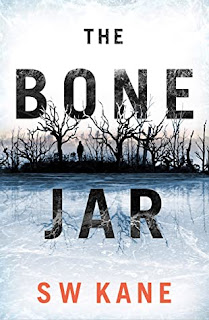 London-based author S.W. Kane makes her literary debut with the crime thriller "The Bone Jar," a Thomas & Mercer release due for publication on July 1st, 2020 that is listed as one of Amazon's June "First Read" titles offering Prime members a first glimpse at up-and-coming titles.

The story centers around Blackwater Asylum, a former mental health asylum still sitting on prized property on the banks of the Thames River. High-powered developer Patrick Calder wants the Battersea stain to go and has largely acquired the property with plans for a luxury development. The only thing, or only one, in his way is the mysterious Raymond, a former patient whose release from the facility upon its closure sent him out into a world he wasn't equipped to deal with and back into the safety of one of the facility's now abandoned shelters where he squatted long enough to be named the small shelter's owner.

With Patrick Calder closing in and Raymond hunkering down, things begin to come to a head when the body of an elderly woman is found in Keats Ward, an isolated unit of the former asylum that had been a bit of a mystery even to those familiar with the place. When another body is soon discovered in the river nearby, the secrets of Blackwater Asylum begin to reveal themselves compounded by the relentless searching of urban explorer Connie Darke, whose sister had died in a mysterious accident in the asylum, and Detective Lew Kirby, whose job it is to figure out this entirely too complicated mess of a mystery.

There's a phrase used in construction called "good bones." "The Bone Jar" has good bones, an intriguing concept of a story set in a compelling setting and with characters who seem worthy of further exploration. Unfortunately, "The Bone Jar" never really fleshes out its story, visualizes the potential of its setting, or gives us characters with whom we become invested.

As "The Bone Jar" appears to be the first in an intended series of books centered around Detective Lew Kirby, the series itself has potential to develop into an intriguing mix of crime thrillers and police procedurals complete with Kirby, a bit of a flawed character with his own bit of baggage to deal with in life and a predictably stale love life.

While "The Bone Jar" is set in the London area, the story itself feels universal despite references to familiar landmarks that clearly set its locale.

"The Bone Jar" is most effective as a police procedural, the jigsaw puzzle of a mystery engagingly put together by Detective Kirby and a partner who is criminally under-utilized. While the mystery itself is rather light, as in I had the story pegged less than a quarter of the way through the novel, the journey to get there is involving and nicely constructed.

"The Bone Jar" is less effective as an actual crime thriller. While asylum-set mysteries and horrors are a dime a dozen these days, "The Bone Jar" never really immerses the reader inside the world of Blackwater Asylum and in the tensions lying underneath the seemingly above-water deals and beneath the surface secrets and deceptions. Multiple characters have their own secrets, a fact we know because the characters usually say it as an aside. It's a weird approach that lessens the mystery and seems to not trust the reader to actually get it.

Feeling like the introduction to a world that it actually is, "The Bone Jar" is a decent enough read even if it falls short of being the incredibly engaging, dark, and mysterious crime thriller that you want it to be. Yet, there's something promising here and given the marketing push the book is receiving it's likely that enough readers will become introduced to the world that many will go along for the ride and eagerly anticipate Kane's next Detective Kirby adventure. Here's hoping that the next adventure further immerses us in its world and into the lives of characters who feel paper-thin here and lacking in the valued relationships that would give them more substantial meaning.

As noted, "The Bone Jar" is a Thomas & Mercer release scheduled to arrive on July 1st.
Posted by RPropes at 7:16 AM