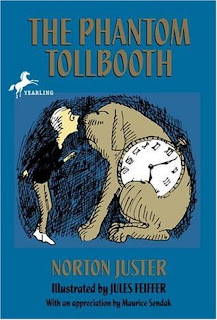 In this age of COVID-19 and civil unrest, I found myself recently having a video chat with a friend and discussing the latest and greatest books. Much to her surprise, I confessed that I'd never read Norton Juster's "The Phantom Tollbooth," a children's fantasy semi-classic first published in 1961 by Random House.

"The Phantom Tollbooth" tells the story of Milo, a bored young boy who one day receives the gift of a magical tollbooth. Having nothing else to do, he drives through it in his toy car and is transported to the Kingdom of Wisdom, a land that once prospered but is now troubled following the exiling of Princesses Rhyme and Reason. Acquiring two loyal companions, an oversized "watchdog" named Tock and the blustering Humbug, Milo sets off on an adventure to restore the Kingdom of Wisdom to its state of glory by releasing the Princesses Rhyme and Reason from the Castle in the Air. Along the way, Milo learns valuable life lessons and discovers a love of learning that will help him see himself and the world around him anew.

Borne out of a grant that Just received from the Ford Foundation to write a children's book about cities, "The Phantom Tollbooth" came to Juster after increasing frustration with the original concept and also following ideas put forth by his housemate at the time, illustrator Jules Feiffer, whose work would eventually companion Juster's words.

Often compared to the likes of Lewis Carroll's "Alice's Adventures in Wonderland" and L. Frank Baum's "The Wonderful Wizard of Oz," "The Phantom Tollbooth" is most certainly a different sort of literary beast though the comparison itself is certainly understandable. The book starts off rather magically, a Jules Feiffer map creatively manifesting the Kingdom of Wisdom with all its boroughs and municipalities from Dictionopolis to Digitopolis to the Doldrums to the Mountains of Ignorance and many more delightful locales.

As Milo begins his adventure by speeding through "The Land of Expectations," he lands in Dictionopolis where King Azaz, ruler of the world of letters and words, sets the stage for the adventure that is to unfold. There's never any doubt that Milo, despite not feeling quite up to the task, will rise to the occasion and set off to rescue the Princesses. Along the way, he will encounter such imaginatively realized beasts as the Terrible Trivium (the demon of petty tasks and worthless jobs) and the Demon of Insincerity. Initially overwhelmed by all these things he doesn't understand, over time he immerses himself in the words and numbers and knowledge and begins to embrace this new way of living that he is learning. Even as Milo's journey winds down, he laments not having arrived sooner, a deficit he attributes to his own lack of knowledge and mistakes made along the way to which Princess Rhyme responds in what I believe to be the essence of the book itself - "It’s not just learning things that’s important. It’s learning what to do with what you learn and learning why you learn things at all that matters.”

While it may seem that "The Phantom Tollbooth" could be difficult for those children (or adults) with language comprehension or reading challenges, instead it's a book that embraces the ability of each child to learn differently and celebrates that journey of learning. Upon his return home, Milo looks forward to future journeys with the tollbooth but, alas, the tollbooth disappears replaced by a note addressed to "Milo, Who Now Knows The Way." Milo is empowered to journey through lands yet undiscovered and to reach them himself. It's a wonderful message, a reminder of each child's potential for learning and understanding in ways that can be communicated and in ways that cannot be communicated.

For some, "The Phantom Tollbooth" will be a quick, immersive read and for others, myself included, it will be a book that is either read a chapter at a time or simply enjoyed at a leisurely place. The word play is whimsical yet pointed; the puns endlessly entertaining. Milo himself transforms from a boy who is constantly bored to a boy who can't look around without seeing all there is to see and do.

Email ThisBlogThis!Share to TwitterShare to FacebookShare to Pinterest
Labels: Children