"Eat the Buddha: Life and Death in a Tibetan Town" - Barbara Demick 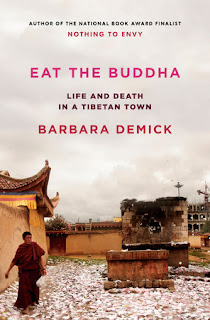 “I have everything I might possibly want in life, but my freedom.”

If you're like most Americans, you've likely spent your life romanticizing the mysterious land of Tibet, a nation long vulnerable to invasion from its neighboring China yet a nation often known more for "Free Tibet" campaigns, passionate Buddhism and disciplined monks, and an idyllic setting that Hollywood seldom represents accurately.

Demick, however, is NOT Hollywood. Currently the Los Angeles Times' bureau chief for Beijing, Demick tells the story of Tibet largely through the lens of Ngaba, a Tibetan town perched 11,000 feet above sea level that sits along a border to China and yet has become one of Tibet's most elusive and difficult to visit locales.

Starting, at least briefly, in the 1930's when Mao Zedong's Red Army fled into the Tibetan plateau to escape adversaries in the Chinese Civil War, "Eat the Buddha" takes its name from the Red Army's fight for survival in Ngaba's rugged, elevated terrain by consuming religious statues made of flour and butter. This would become the early days of China's increasingly intrusive and dominating behavior toward its more spiritual and peaceful neighbor, a "relationship" that Demick largely picks up in the 1950's and explores through her three trips to the isolated town from 2013 while interviewing Tibetans in Ngaba along with others living abroad including the Dalai Lama, an exiled princess, and a host of others.

Demick's history of Tibet is an often heartbreaking one chronicling decades of Chinese incursions that have resulted in cultural upheaval, economic hardship, and the deaths of an estimated 300,000 Tibetans. Determined to sweep out religion, China destroyed monasteries and often punished those who even dared to mention the Dalai Lama's name.

Spanning decades of Tibetan and modern history, "Eat the Buddha" captures its heart-center through the stories Demick brings to life throughout her journey including a princess whose family was wiped out in the Cultural Revolution, a young Tibetan nomad who becomes radicalized in Kirti Monastery, an upwardly mobile entrepreneur who falls in love with a Chinese woman, a poet and intellectual who risks everything for his voice to be heard, and a young Tibetan schoolgirl who is forced at a young age to choose between family and the prosperity offered by Chinese money.

Demick weaves engaging tales here, an abundance of history woven into the tapestry of the lives that history impacted and a never-ending commitment to removing the veil of mystery from Tibet in favor of a more honest, reasoned understanding of the land and its people and the devastating impact of China's often brutal domination of the region.

There's no question that "Eat the Buddha" offers a largely one-sided perspective, Tibet's voice given tremendous clarity while nary a Chinese voice to be found here. That said, Demick also captures vividly a conflicted Tibet that is far removed from the romanticized Tibet portrayed by Hollywood or even the Tibet so often captured by those who would advocate for its freedom. There's an understanding in Tibet that China brings financial prosperity, technological advancement, and greater opportunities, but there's also an undeniable sense of grief and loss as Tibetans increasingly experience the loss of their spirituality, culture, and way of life.

"Eat the Buddha" is often brutal in its portrayal, Ngaba itself having at one point become the center point for a wave of self-immolations that swept through Tibet's Buddhist monks and nuns as perhaps the most extreme form of protest possible.

Do they resist the Chinese? Do they join them? Do they adhere to the Dalai Lama's teachings of non-violence and his support of a "middle way?" These issues are thoroughly explored in "Eat the Buddha" and in most ways Demick refuses to offer up anything resembling an easy answer.

There are no easy answers here.

"Eat the Buddha" is an immersive and atmospheric read, its interior design fosters a sense of antiquated historicity and a feeling, even within the font, that you've gone back into time and into another space. Intellectually satisfying and emotionally resonant, "Eat the Buddha" is a slow read that demands attention to detail and a willingness to embrace both history and humanity.

At times, that balance is difficult to achieve as deeply moving stories can be temporarily interrupted by paragraphs or pages of historical background. The closing chapter of "Eat the Buddha," as well, follows a chapter of character closure with what amounts to being historical summary and a methodological overview that feels anti-climactic and simply less satisfying than if Demick had allowed us to reflect upon the characters whose lives have been so deeply impacted by contemporary Tibetan and Chinese history and relations. It feels much like a movie where you believe you're in the closing scene only to have the director keep going toward a less satisfying conclusion.

However, these are minor quibbles for a book that is engaging, immersive, and incredibly important. Demick, whose last book "Nothing to Envy: Ordinary Lives in North Korea" was a finalist for the National Book Award and won the Samuel Johnson Prize for Non-Fiction, has crafted an occasionally shocking, deeply revealing, and immensely touching account of a Tibetan town shatters the facade while reminding the world why we fight to free a Tibet we don't really understand.

"Eat the Buddha: Life and Death in a Tibetan Town" is scheduled for release on July 28th from Random House.
Posted by RPropes at 5:15 AM