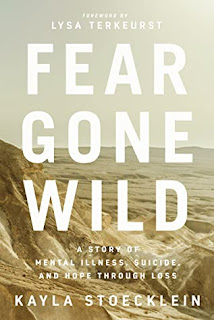 I've struggled for three days with how to write a review for Kayla Stoecklein's upcoming release "Fear Gone Wild: A Story of Mental Illness, Suicide, and Hope Through Loss."

As a survivor of suicide myself, someone who's worked in the field of crisis intervention, and even as someone who was once kicked out of a church in my early 20's following a suicide attempt, I found myself eagerly anticipating the arrival of "Fear Gone Wild," Stoecklein's deeply personal account of her husband's journey with depression and anxiety that ended with his death by suicide on August 25th, 2018 and her own subsequent realization that she hadn't understood the depths of his struggles nor the stigma often attached to mental illness by many churches.

Stoecklein's late husband, Andrew Stoecklein, was lead pastor for Inland Hills Church, a mega-church in Chino, California founded by Andrew's father and the church where Stoecklein would be found on August 24th by church members following his suicide attempt.

At the time of Stoecklein's death by suicide, it seemingly sent shock waves through the Christian community. While it was modestly known that Stoecklein had dealt with depression and anxiety, what had seemed like an idyllic life ended tragically.

Kayla Stoecklein takes us through the weeks, months, and years that led up to Andrew's death including their college courtship, their post-graduation marriage, Andrew's brief flirtation with life outside ministry followed by his inevitable call back into it, and the pastoral journey that led Andrew to first serve alongside his father as the Inland Hills Creative Arts Pastor before being called as lead pastor following his father's death.

At less than 30-years-old, it would seem that the Stoeckleins were living the perfect life as parents of three young children and leaders of a vibrant faith community.

Of course, one can tell from the title of "Fear Gone Wild" alone that all was not idyllic. Andrew began exhibiting signs of depression and anxiety early in his marriage, incidents captured vividly throughout "Fear Gone Wild."

"Fear Gone Wild" is most effective as an exploration of Stoecklein's complicated grief following Andrew's death. She acknowledges that she failed to understand the seriousness of Andrew's depression and anxiety and it's a failure she seems determined to not continue as she and her sons live their lives forward faithfully and with a determination to remove the stigma around mental illness and suicide. To her credit, she's not afraid to show the ugly and difficult parts of dealing with a partner's mental health struggles. There are times in "Fear Gone Wild" when you begin to wonder how their marriage even survived as her impatience is obvious and her frustration grows with having a husband who was increasingly unavailable and impaired by his depression and anxiety. These are difficult parts of "Fear Gone Wild" to read as they had to have been difficult parts to write.

While "Fear Gone Wild" occasionally works as an exploration of Stoecklein's own grief, it's considerably less successful as a story of mental illness, suicide, or the stigma that often surrounds mental illness among Christians.

Stoecklein often, and I mean very often, uses stigmatizing language throughout "Fear Gone Wild," a tendency that begins early in the book when she describes Andrew's father as becoming "bound" to a wheelchair.

In case you're unaware, that's just about one of the most derogatory statements you can make about a wheelchair user. "Wheelchair bound" or "bound to a wheelchair" is a tremendous insult and considered derogatory ableist language.

It certainly doesn't end there.

Stoecklein struggles to utilize language that is de-stigmatizing, though certainly her efforts to view the experience through a spiritual lens by using "wilderness" are understandable and give perspective on her own experience of having gone through this journey and experienced this devastating loss. While Stoecklein occasionally comes right out and says "mental illness" or "depression" or "anxiety," more often than not she defers to "darkness" or "wilderness" and more often than not she turns the story's viewpoint not on her husband but on herself.

It is practically an undeniable truth that the Church, not just Inland Hills but many Christian churches, have long been woefully inadequate in addressing mental health issues and in removing the stigma of mental health amongst congregants and pastors alike. Faith is supposed to be "enough" to help us transcend life's woes, an unrealistic pressure magnified for those in pastoral leadership roles tasked with providing spiritual direction while too often being expected to deny their humanity. It's an unrealistic expectation, of course, but it's one that continues to challenge churches as we tend to want our pastors to be strong, wise, pure, personable, and without any obvious failings.

The pressure to perform is real and it's obvious in the pages of "Fear Gone Wild" that Andrew struggled with that pressure up to the day he died. As is nearly always true when someone dies by suicide, we seldom know the exact reasons or causes or thoughts unless they choose to find a way to share them. Much of "Fear Gone Wild" seems to be written from that lack of knowing, but also from a place of faith.

"Fear Gone Wild," while ultimately too unsure and too disjointed to effectively explore mental illness, suicide, or stigma, will likely be a more meaningful read for those who can appreciate Stoecklein's vulnerable exploration of her grief and her pointed theological exploration of those times when God's followers have gone through wilderness. Additionally, Stoecklein explores the issue of whether suicide is an unforgivable sin (HINT: It's not) and does offer some valuable resources at the end of her book for those who might be in need of support.

I've struggled for three days with how to review "Fear Gone Wild," a book I ultimately found disappointing yet a book that tells a story needing to be told and that deals with a stigma around mental illness that the church has long needed to deal with. While I found much of Stoecklein's language troubling, too much of the focus on her own experiences, and the book itself tonally uneven, there's still a place for "Fear Gone Wild" in the discussion around mental health and faith and it's hard, actually impossible, to not respect Stoecklein's willingness to share her experiences and her healing journey through all its joys and sorrows.

"Fear Gone Wild" will be released on September 1st by Nelson Books.
Posted by RPropes at 7:25 PM