"Sharing a House with the Never-Ending Man: 15 Years at Studio Ghibli" - Steve Alpert 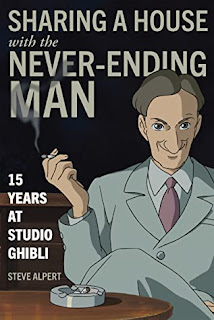 Released just this past month by Stone Bridge Press, "Sharing a House with the Never-Ending Man: 15 Years at Studio Ghibli" recounts the interesting adventures of former Studio Ghibli senior executive Steve Alpert, the only Gaijin (foreigner) within the company's ranks and the man largely tasked with presenting Studio Ghibli forward into a world ready to receive its brilliance.

Less an autobiography than a detailed, precise collection of anecdotes chronicling Alpert's 15 years with Studio Ghibli and its former parent company Tokuma Shoten, "Sharing a House" is simultaneously an immersive and frustrating beast of a book as Alpert's recollection is strong and he literally fills each page to the brim with the most minute details of experiences ranging from everyday business dealings to Japanese culture to Harvey Weinstein to the remarkable awards frenzy experienced by the groundbreaking "Spirited Away" that largely turned Studio Ghibli into an international household name.

Frequently, however, that same strong recall works to Alpert's disadvantage as "Sharing a House" can become bogged down in mundane factoids that likely seemed interesting but will mean little except to those who are equally immersed in Japanese culture or even those who were actually there at the time. Furthermore, observations that there's a hint of unhealthy, if not downright toxic, masculinity are evident throughout "Sharing a House" appear to be credible as Alpert is prone to describe women in ways that at least hint of a subtle sexism. There are other stereotypes evident to a lesser degree, as well, and a tendency to generalize experiences that one might expect to be written in more depth given Alpert's 15 years with the company and extensive background working in Tokyo, Kyoto, and Taipei.

"Sharing a House" has a very structured sensibility within its writing. There's a literary reverence to the key figures, most notably Hayao Miyazaki himself who is never referred in any other way than "Hayao Miyazaki" even when within the same sentence more than once. It's unusual and, to be honest, more than a little exhausting to read. Alpert did the same with Harvey Weinstein, who seems to be re-introduced on more than one occasion and is treated with what feels like a reverence that feels more than a little undeserved given the extensive allegations and facts already presented. Alpert himself acknowledges that his relationship with Weinstein was pre-"Me Too," a reference that casts a shadow on much of the Weinstein material.

As one might expect, a good deal of "Sharing a House" deals with Miyazaki himself, though the book never really moves beyond a few character quirks and delves into the creative aura of an animation genius respected worldwide. I'm not sure we actually get to know Miyazaki that much better in "Sharing a House," though there's definite charm to be found in experiencing how Alpert himself experienced Miyazaki.

Alpert was a former Disney employee hired by Tokuma Shoten to handle Studio Ghibli's international marketing and, much more specifically, their relationship with Disney. This is, perhaps, where the book is most successful as it captures Disney's rather notorious hands-on approach to its properties and Studio Ghibli's fierce resistance to anything resembling editing or cutting or Americanizing of their films. Alpert's often humorous memories are a delight here and anyone who appreciates cinema history will find much to celebrate throughout these vividly brought to life tales.

Informative and engaging, "Sharing a House" is also surprisingly impersonal in tone and devoid of the kind of personal flavor that would allow one to easily feel connected to its material. Alpert barely hints at his past or anything outside of work while generally coming off as a quirky, befuddled chap who is also fluent in Japanese and Chinese and has used it to build a rather impressive career. While Miyazaki's quirks and those of Tokuma Shoten's upper leadership are interesting, those craving a deeper immersion inside Studio Ghibli and the actual creative process will likely find "Sharing a House" at least modestly disappointing as Alpert largely sticks to the business side of things and proves to be a rather observational narrator.

While "Sharing a House with the Never-Ending Man" may not be quite the awe-inspiring glimpse inside one of the world's most awe-inspiring animation houses that one might hope, it's still an impressively detailed and enjoyable insider's look at how business and creativity often collide and how those collisions are even more complicated by cultural conflicts and artistic integrity. For fans of Studio Ghibli and Hayao Miyazaki, "Sharing a House with the Never-Ending Man" offers enough depth and detail to make it a worthwhile read.
Posted by RPropes at 7:03 PM