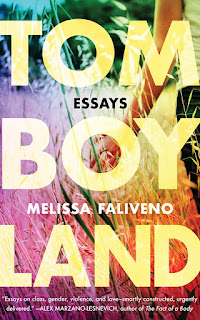 I picture Melissa Faliveno, author of this Amazon First Read title "Tomboyland," one day sitting in front of her computer reading these words.

I picture her laughing, perhaps wondering aloud "Who is this lunatic?"

It's a fair question.

The truth is that "Tomboyland" isn't what I expected, though I must plead guilty when I acknowledge that my expectations were influenced by my own preconceived notions of what it means to explore the intersection of identity and place and to confront achingly vulnerable questions about gender identity, queerness, sexuality, and commitment.

The truth is that the reason I picture Faliveno laughing as she reads these words is that, above all else, "Tomboyland" is a love story to me.

"Tomboyland" kicks off with Faliveno's childhood in rural Wisconsin, a place of rolling prairies and towering pines where girls are girls, boys are boys, women become mothers and wives, and where life fits nicely and neatly between established boundaries and expectations.

It's just the way it is. Unless it isn't.

It would be reasonable for you to expect Faliveno to disparage this almost paint-by-numbers childhood, yet it's an expectation that would never be met.

She loves Madison, Wisconsin, where she went to college and discovered more questions than answers and explored what it means to be Melissa Faliveno. She explored her relationship with her name and her gender and her sexuality and her feminist views and her submissive body.

She explored what it means to love, at times painfully and at times imperfectly. She did the best she could until she knew better. Then, she did better.

Yeah, I kind of quoted Maya Angelou. Deal with it.

"Tomboyland" is filled with essays you don't quite expect, from essays about Wisconsin to essays about kink and guns and gender and queerness and college and home and love and parenting and, well, about life and all the questions we ask as we're growing up and growing into who we believe ourselves to be and who we want ourselves to be.

"Tomboyland" is both culturally aware and intimately insightful, an exploration of Midwestern values, traditions, mythologies, landscapes, and unspoken truths that all somehow mold those of us who've ever called the Midwest home. Despite being a lifelong urban dweller in Indiana, Faliveno's truths still feel true and they feel honest and, perhaps most importantly, they feel true to who she was and who she's become.

There's an essay on tornadoes, particularly a June 1984 F5 tornado that leveled her nearby village of Barneveld, that is simply riveting and easily one of my favorite essays from anything I've read yet this year.

Faliveno beautifully weaves together a human tapestry, occasionally light humor creeps its way through discussions of kink party potlucks and gun ownership and what it means to not want children of her own. Faliveno seems almost bewildered by her current relationship status, while she writes so warmly and affectionately about playing softball that you'll practically want to join her out on the diamond.

"Tomboyland" seems an almost odd choice for an Amazon First Read, yet it's easily the favorite amongst those I've experienced thus far. It's not quite a "love it" or "hate it" title, though Faliveno's ability to blend together both difficult to discuss subjects with stark beauty and remarkable beauty may very well leave even a good number of experimental readers feeling a bit askew.

So be it. "Tomboyland" is, most likely, not a book for everyone but for those who embrace it there will be a strong emotional connection and what can only be described as a kinship with Faliveno's literary voice. As someone whose body was disabled at birth by spina bifida and paraplegic and eventually by double amputation and more, I resonated deeply with Faliveno's exploration of body image and self-identity and what it all means.

As someone who was further physically damaged by sexual assault, Faliveno's writing on gender identity and sexuality exploration feels like a green light to put words to experiences and beliefs and ideas that have mostly existed in the foggy corners of my mind.

Yet, I also connected with her sense of connection and the fluid way it plays out in her daily life. I connected with the tenderness, there's that word again, that somehow finds its way into nearly every chapter as if it's something that manages to find Faliveno even when she tries to hide from it or leave it behind.

This debut collection of essays is a work of emotional, physical, and universal wonder. Unapologetically honest and uncommonly wise, "Tomboyland" marks the debut title from an author whose work I look forward to reading again and again and again.

"Tomboyland" arrives on August 1st from TOPPLE Books & Little A.
Posted by RPropes at 6:13 PM