"A Better Man: A (Mostly Serious) Letter to My Son - Michael Ian Black 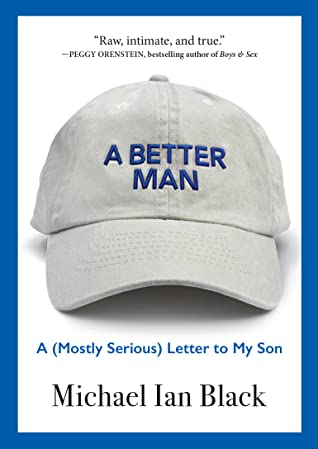 If you're familiar with the work of comedian/actor/writer Michael Ian Black, "A Better Man: A (Mostly Serious) Letter to My Son" may very well come as a bit of a surprise.It shouldn't, really.

While the longtime member of the comedy group The State is well known for his dry sarcasm and irreverent wit, Black has also been known, if you're paying attention, for socially insightful commentary and his increasingly popular role as a successful author of children's books.

In case you can't quite figure it out, "A Better Man" is essentially a letter from Black written to his college-bound son Elijah, whom Black most obviously worries about and even more obviously completely adores.

"A Better Man" is, indeed, a mostly serious endeavor though there are certainly moments when Black allows his humor to shine through and lighten, in mostly all the right moments, his most serious and potentially dark thoughts. Black gives us the richness of his humanity here, simultaneously far more vulnerable than we've ever seen him yet also occasionally defensive and fearful and guarded and, well, quite aware that he's intentionally showing the world the Michael Ian Black that they've never fully seen but he's always wanted to show to his fans and, perhaps even moreso, to Elijah.

Black began his journey inward with his last effort, "You're Not Doing It Right." It's a journey that continues here and both deepens and broadens. The earliest pages of "A Better Man" are profound and deeply moving, Black reflecting on the Sandy Hook massacre that occurred only blocks from his own son's school and subsequently weaving together memoir, personal and parenting reflections, and occasional social commentary as he seemingly points his son toward a healthier masculinity and toward the lessons that he hopes his parenting has brought forth in their mutual journeys.

Black knows that he's not a perfect man. He also knows that he wasn't a perfect parent. He occasionally seems to serve up a literary wince, reflecting upon those times when he's allowed his own past traumas and life baggage to get in the way of his being the father he wanted to be. It's not so much an end result that Black shares here as it is his hopes and fears, failures and belief in something other than himself that he doesn't quite call God but acknowledges has helped to illuminate his path.

Black explores the complicated relationship he had with his own father, a man who passed away traumatically at the age of 39 leaving unanswered questions and unresolved issues. "A Better Man," which feels essentially like a call to himself and a calling up of Elijah, immerses itself in light melancholy as Black writes to his son about everything from violence to sexuality to relationships to gender roles and, without question, most of all love.

Black explores toxic masculinity, but "A Better Man" is most certainly not about toxic masculinity. It is, instead, about reclaiming masculinity as something worth celebrating because it loves and protects and guards and is tender and is most certainly non-violent. The social commentary is undeniable here, though for the most part "A Better Man" stays fairly light within the political realm. Black most certainly discusses gun violence and those who work in the area of sexual violence will rejoice at the simple, straightforward way that Black instructs his son to always except "no" for an answer even if it's at the last minute and even if it's right in the middle.

Black makes sure his son understands that the same standard should always work both ways. It's a beautiful lesson, a desperately needed lesson, in a book that is filled with simple, straightforward yet deeply meaningful lessons from father to son as the son prepares to leave home and begin their tiptoe into adulthood.

There are moments, rather brief ones, when "A Better Man" flounders a bit as Black infuses his material with facts and resources that feel more like essays and less like a personal letter. However, these moments are truly relatively brief and also give Black's teachings a layer of substance and depth.

The truth is that "A Better Man" begins and ends sublimely. In between those literary bookends, "A Better Man" is filled with the heartfelt insights and vulnerable imperfections of a comedian and actor and writer doesn't so much want his son to "man up" as he wants his son to be "a better man."

An ideal book for those on the parenting journey and for longtime Michael Ian Black fans, "A Better Man: A (Mostly Serious) Letter to My Son" may be parenting advice but it's also stellar life advice as Black teaches us that there's a better way for boys and men to live and that better way is love and compassion.
Posted by RPropes at 8:18 PM