"After Evangelicalism: The Path to a New Christianity" - David P. Gushee 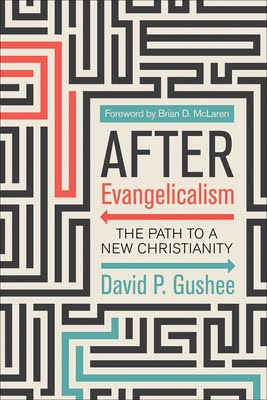 I'm embarrassed to admit that David Gushee, Distinguished University Professor Christian Ethics at Mercer University and the current president of the American Academy of Religion, wasn't on my radar despite what I would like to consider to be a rather pronounced effort to recognize and become familiar with contemporary Christianity's more progressive voices.However, I saw Gushee's name cross my Twitter feed when someone talked about this book, "After Evangelicalism: The Path to a New Christianity," and after a quick browsing of its subject matter decided to check out the book for myself.

If you've followed my writing for any length of time at all, you know that I've had a rather chaotic and not particularly positive journey with the world of organized religion. From a childhood spent as a Jehovah's Witness, the first of two paths to kick me out, into John Wimber's Vineyard movement, second of two paths to kick me out, I then moved toward an extended period in a New Thought church, where I was ordained, and, with a couple diversions, a seminary journey of licensed ministry with Church of the Brethren before my current tiptoeing between the Unitarian-Universalists and the Presbyterians (USA).

It wasn't really until reading Kate Bowler's "Blessed" that I could solidly identify some of the patterns, mostly dysfunctional, that led me to repeatedly head down theological roads that I inevitably found disappointing and from which I seemed to inevitably get hurt.

"After Evangelical" does, indeed, serve up Gushee's proposal for a path to a new Christianity, a way to set aside our disillusionment with an increasingly ego-driven and decidedly non-Jesus centered evangelical path and move toward a living relationship with Christ that is intellectually consistent and morally robust.

Quite simply, "After Evangelicalism" enthusiastically proposes that it is not just possible to follow Jesus out of evangelicalism but it is necessary to do so.

Thus, how you feel about evangelicalism may very well help determine how you receive "After Evangelicalism." If you're offended by anything I've already written, then it's unlikely you'll find Gushee's proposal satisfying. After all, you'll be unlikely to believe there needs to be life after evangelicalism.

In fact, you're probably thinking evangelicalism is just fine...maybe even better than ever.

On the other hand, if you're troubled by the evangelical embrace of President Trump and if you have more than a few concerns about the evangelical rejection of climate change and the seemingly inconsistent messages about what seems to qualify as "pro-life," then "After Evangelicalism" may very well help you put words to those feelings you've been having about faith, church, your own journey, and how to make sense of it all.

Truthfully, Gushee spends very little time talking about President Trump, though it's pretty clear that, as the old saying goes, that's likely the straw that broke the camel's back. Gushee, who spent a good majority of his life in the evangelical world via his Southern Baptist tradition, began veering away from identifying as evangelical the more progressive his writings and his theological voice became including his call for full acceptance and inclusion of the LGBTQ community that pretty much rendered him an untouchable in the evangelical world.

"After Evangelicalism" is a fairly weird mishmash of a book. It's simultaneously an academic endeavor and a surprisingly casual one. In fact, in terms of style Bowler and Gushee could easily be literary cousins given their abilities to write with both remarkable intellectual depth and emotional honesty.

Gushee spends a good amount of "After Evangelicalism" exploring precisely what went wrong with U.S. white evangelicalism by exploring such relevant areas as evangelical identity, biblical interpretation, church life, sexuality, politics, and race. Gushee packs an awful lot of information into "After Evangelicalism," thus at times the collection is both more of a primer to subjects that inevitably require more depth and also a bit of an overview of Gushee's previous writings. Once he's explored these subjects, Gushee begins vividly and passionately proposing new ways of living, belonging, and believing. Each chapter ends rather nicely with a sort of summarized collection of "takeaways," offering a solid framework for the material at hand.

Many who write from a more progressive theological space tend to shy aware from more "churchy" language, but Gushee embraces it. Now attending a more progressive Baptist church along with his wife's Catholic Mass, Gushee clearly still embraces the beliefs and practices of his organized faith while also accepting that the word evangelical no longer applies and, in fact, he defines and embraces the path of a Christian humanist.

"After Evangelicalism" is not likely to be a book with which you'll always agree. Gushee's relentlessly pushing forward here and boldly embracing subjects that most churches don't even talk about let alone actually take a position on. Indeed, I didn't always find myself in agreement with Gushee - I was particularly troubled, for example, by his open embrace of LGBTQ and transgender Christians but then somehow finding space to remove polyamorists from the circle with tremendous intention. To be honest, it just felt unnecessarily mean-spirited to be so specific about it.

There were other times I found myself mumbling "Yes!" or "I don't agree," but that's really part of the joy of a book like "After Evangelicalism." It's a joy hearing and exploring new ideas and following that up with thought, prayer, research, and discussion.

Indeed, "After Evangelicalism" is a book that practically begs to be studied and discussed.

To use Gushee's own language, if there's one thing I take away from "After Evangelicalism," and it's a huge takeaway, it's this central idea of Christian humanism. Gushee explains it beautifully and it explains so much so perfectly about my own journey, beliefs, practices, and why despite multiple challenging experiences I continue to believe, explore, follow, and worship. It feels, on a certain level, like I have words to describe my faith journey.

While at times I wished "After Evangelicalism" would dig even deeper within its subjects and there were times I wished for a lengthier book that would have allowed for a more relaxed presentation, "After Evangelicalism" is undoubtedly a book I will refer to again and again and a book that has already left me in deep contemplation and feeling more peaceful than ever with my chaotic spiritual past and a present that feels like it was worth all that chaos.
Posted by RPropes at 7:23 PM