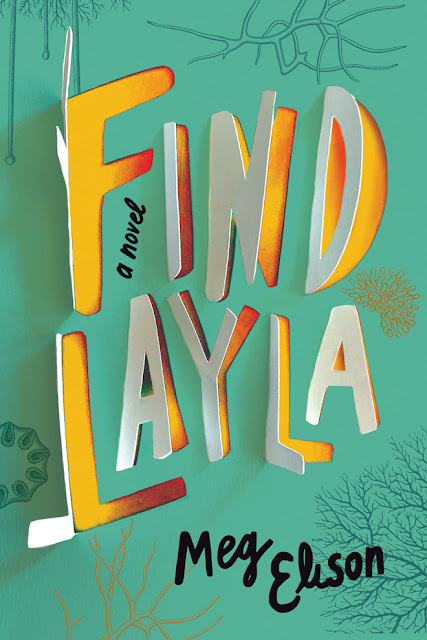 There were a million ways that Meg Elison's upcoming YA novel "Find Layla" could have gone horribly wrong, yet somehow this never happens in what is, I'll confess with some surprise, a most rewarding and incredibly moving literary experience wrapped around the coming-of-age story of fourteen-year-old Layla.

Layla isn't the kind of young girl who usually gets her own YA novel. Yet, within a few pages of "Find Layla" you'll find yourself drawn to this remarkable young girl who's never really been given the chance to be remarkable growing up with a mostly absent mother in a chaotic, unpredictable environment while trying to provide for some normalcy with her younger brother, Andy.

There are many things that are admirable about "Find Layla." There are many things that are stunning about "Find Layla." Yet, what I am most drawn to with this somewhat short yet substantial story is just how much empathy Elison offers to Layla and how much she manages to ensure the young girl's dignity even in those difficult to read moments that are traumatic, humiliating, and far too often the stuff of very real childhoods.

Fourteen-year-old Layla is a SoCal teen living a life that is hidden but actually isn't. She's incredibly self-aware, yet underprivileged and the subject of nearly constant bullying at the junior high school where it seems like everyone else is privileged. The only real attention she gets is from the school's "mean girls" who tweet about her ragged appearance, greasy hair, dirty clothes and, well, smell.

Somehow, amidst it all, she carries a deep love for science and a 4.0 GPA.

When a school competition calls for a biome, an increasingly vulnerable Layla decides to peel off the layers of masks she's been wearing over every aspect of her life.

Boy, does she get attention.

When Child Protective Services inevitably responds, Layla loses the only world she's known. I mean, sure that world sucked. But, she knew it.

Visible for the first time in her life, Layla has to learn how to face her truths and maintain her wholeness in a world that is suddenly watching her every move.

This is an immersive, difficult to put down book and yet an emotionally resonant book that will move some to tears and perhaps be a tad too difficult for some others. An Amazon First Reads offering during the month of August, "Find Layla" is due for release by Skyscape on September 1st and it's a definitely winning novel for the award-winning Elison.

At its literary core, "Find Layla" paints a realistic world for Layla that is undeniably tragic in that truth. Yet, Elison is also writing about growing from the lives we're given and breaking free from the cycles that continue to bind us. Refusing to offer Layla anything resembling an articial, paint-by-numbers resolution, Elison instead offers her something even greater - empowerment and a sliver of light with which to grow.

The dialogue in "Find Layla" feels honest and truthful, Layla's occasional advanced language an obvious result of her strong academics and fiercely disciplined studying even against amazing obstacles. There could have been so many cliche's that came out of "Find Layla," but Elison for the most part avoids them in favor of multi-shaded social workers, foster parents, well-meaning do-gooders, and those godawful bullies who sometimes truly never change.

Refreshingly, even the supporting characters are drawn with complexity. Layla's brother Andy is so clearly developed that you can easily visualize him, while her mother waxes such a tragic figure that you practically expect her to spew forth Shakespeare. Layla's friend Kristi feels just like the kind of friend that Layla would have, while other characters like Bette, Dr. Jones, Erica, and others come alive in really special ways.

To offer too much in the way of narrative would spoil the emotional rollercoaster that is "Find Layla," a book that I can't quite call entertaining yet a book that is so substantial that it feels as if it shifted around my reader's DNA. As my first title from Elison, "Find Layla" is a book that will inevitably lead me to explore more of her previous works.

Primarily known as a science fiction author, Elison has masterfully woven science into life's human tapestry and created an honest and true masterwork of survival of the teenage spirit.
Posted by RPropes at 10:09 PM