"Too Many Times: How to End Gun Violence in a Divided America" - Multiple Authors 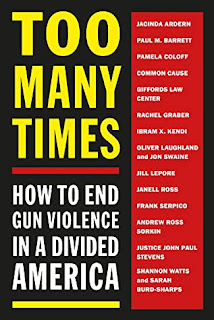 I've wrestled over the last couple of days with how to rate and review "Too Many Times: How to End Gun Violence in a Divided America," primarily because I am the choir to which the collective of educated and well-informed authors preach yet I can't help but feel like the book falls at least a little bit short of its lofty vision.

The voices represented here are familiar ones in the discussion around violence ranging from Moms Demand Action founder Shannon Watts to Everytown for Gun Safety's Director of Research Sarah Burd-Sharps to National Coalition Against Domestic Violence's Public Policy Director Rachel Graber and quite a few others.

"Too Many Times" is a collection of writings, some historical and familiar and others lesser known and/or original. The collection is essentially divided into three particular talking points around the issue of gun violence - 1) How gun violence impacts us today, 2) How we have gotten to this juncture legally and socially, and 3) What we can do to reduce and end gun violence in America today.

For those already involved in the issues around gun violence, there's no question that the book's final talking point addressing what we can actually do is easily the most vital and informative.

The essays around gun violence's current impact are for the most part familiar ideas gathered together as a collective, while those essays essentially drawing from legal and social history are, indeed, familiar discussions that serve as critical knowledge for anyone approaching the issue of gun violence and, most especially, anyone daring to enter the heavily politicized and partisan political arena.

However, it's the third collective of essays that feels vital and fresh and inspiring. It was from this collection, speaking as someone who's been involved in issues around violence and children for 30 years, that left me better informed and significantly more inspired.

At times, however, "too many times" doesn't quite go far enough in addressing the "divided America" part of its title. My argument, essentially, would be that without addressing America's divisions any effort to end gun violence will be short-term in impact.

"Too Many Times" kicks off in riveting fashion, though. "96 Minutes," an article first run in Texas Monthly in 2006, recounts what many consider to be the first true awareness of gun violence as a growing concern with its story of Charles Whitman's mass shooting at the University of Texas-Austin in 1966. While far outshone by the recent documentary "Tower," this piece still vividly brings to life the events of that day and in many ways ties the books three main objectives together.

"I Dream About It Every Night" and "A Lynch Mob of One" are both important discussions, while Justice John Paul Stevens's dissenting opinion in the Heller case is a must read for those involved in the gun control issue even if it is also likely to be incredibly familiar to those same advocates. Stevens long cited the Heller case as one of the Supreme Court's worst decisions of his tenure.

Those who appreciated New Zealand Prime Minister Jacinda Ardern's response to the Christchurch mass shooting will even more appreciate her words recounted here, while a a 2020 NBC News Report on "How Police Justify Shootings" may very well help give tangible meaning to current affairs.

My personal favorite essay closes the book. Frank Serpico's "The Police Are Still Out of Control" is riveting reading and the kind of reading that will invest you in its subject matter while also having you look up that movie "Serpico" that you always intended to watch.

It's a terrific film, by the way.

I will confess that as I wound down my time with "Too Many Times" that I found myself just a wee bit disappointed as I had, perhaps, expected more in the way of fresh material rather than a collective that also included essays previously published. While they remain vital in the discussion around gun violence, as someone who has long been familiar with this issue they were familiar reading and a tad remedial.

However, as a collective of writings it is impossible to gather such respected voices as Shannon Watts, Ibram X. Kendi, Frank Serpico, John Paul Stevens, and others without being in awe of the wisdom and rather taken by their insights. For those early in the journey of exploring issues around gun violence, "Too Many Times" is a must read. For those wishing to gather multiple valuable resources as one, this also remains a vital resource. For experienced advocates and activists, this may not be the collection we always turn to but it may very well be the collection to which we point others as they become advocates and allies.