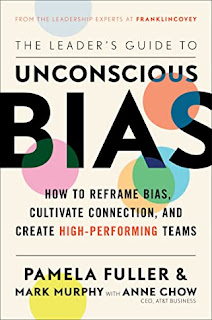 "As leaders, we have an obligation to help each of our team members develop a career as robust and rewarding as they desire it to be..." - Anne Chow, CEO of AT&T Business

From the leadership experts at FranklinCovey, "The Leader's Guide to Unconscious Bias" is an extraordinary guide to reframing bias, cultivating connection, and creating high-performing teams. Written in a remarkably accessible and practical style, "The Leader's Guide to Unconscious Bias" starts with a basic truth - unconscious bias is impacting organizational performance whether we know it or not.

The end result, both applicable and inspirational, is a book that equips readers with tangible tools to create the best environment for all of their team members and to mitigate possible negative impacts of workplace bias.

I wasn't much past the preface to what I'll start calling "Unconscious Bias," a preface sharing that between the time the authors sent their manuscript to the editors at Simon & Schuster on May 15th, 2020 and two weeks later when they received it back for review that the world had dramatically changed as the impact of quarantine had begun to be overshadowed in powerful ways by global protests about racial injustice.

While the connection between injustice and bias, especially within a corporate setting, may seem thin, the truth is they are interwoven. "Unconscious Bias" asserts that bias is, in fact, part of the human condition and how our brains work.

To be human is to have bias.

The power of "Unconscious Bias," a book that challenged me in ways big and small, is that it simultaneously speaks to the corporate world while tapping into the humanity that we all bring into our roles as employees, leaders, and human beings. While speaking to organizations, "Unconscious Bias" encourages each reader to explore vulnerability, develop curiosity, and build empathy - essential choices to be made in moving past our negative biases and choosing courage.

Tackling our biases does take courage.

"Unconscious Bias" explores best practices and strategies applicable to the Talent Lifecycle and speaks to building high-performing teams AND high-performing individuals and creating the high-performing cultures that will foster both of these things.

Yet, it was the final paragraph of the preface that really hooked me, a simple statement shared from FranklinCovey CEO Bob Whitman that "You must do the work your goals require," words shared at a conference yet words that ultimately guide the organizational cultures we create and our work toward a more inclusive world and organization.

Fuller, Chow, and Murphy have crafted an intelligent, insightful, and almost stunningly compassionate book that defines bias, explores the ways in which it helps and hurts performance, and explored tangible ways, many of them documented at the end of each remarkable chapter, we can course-correct when we become aware of unconscious bias influencing our work.

As a professional with a disability, it has been rare for me to see a book addressing leadership skills that gives attention to employees, job seekers, and professional leaders with disabilities.

Yet, "Unconscious Bias" does so and does so regularly throughout the book.

Truthfully? I'll even admit I cried once. Okay, actually, I think I cried and then did a fist bump in the air.

The core of "Unconscious Bias" is the Bias Progress Model, a model that takes the central concepts of identifying bias, cultivating connection, and choosing courage and applies it across the Talent Lifecycle. The power of this teaching for me is found early in the book as we learn to take that lifecycle and go beyond the usual realm of law and policy. Each central concept is associated with a principle, for example "self-awareness," and "Unconscious Bias" beautifully explores both central concept and principle and the ways they work together.

In addition to the wisdom of each chapter, each chapter ends with an extended reflection for individuals along with "Application for Leaders," both essentially practical exercises to help integrate the material more fully.

"Unconscious Bias" became a book that I started with reading.

Then, I read it again.

Then, I re-read it again AND began working through both the reflections and applications. Truthfully? I'm still not done. Each time through "Unconscious Bias" has resulted in seeing something new and having a new "Aha!" moment come to life.

In the second part, Cultivating Connection, "Unconscious Bias" explores belonging, curiosity, empathy, the power of networks, and the ever important navigation of difficult conversations.

Choosing Courage explores the courage to identify, cope, be an ally, and be an advocate. While, finally, the actual Talent Lifecycle explores the very real world issues of getting hired, contributing/engaging, and moving up.

If it's not yet readily apparent, I loved "The Leader's Guide to Unconscious Bias," a powerful and enlightening book both personally and professionally that is beautifully written in a way that makes it easy to read yet also in a way that will make you want to re-read it again and again and again.

I would easily recommend taking the time to explore the exercises at the end of each chapter, exercises that marvelously illuminate the writing and will no doubt help integrate the material so that you'll find, as I have, that the teaching will come to mind the next time you find yourself in a situation where you're experiencing unconscious bias.

In the short time since I read the book for the third time, I've seen myself applying these lessons as an employee and as a leader and there's no doubt this will continue as I work to have the courage to understand bias's role in my life and what I can do about it.

Easily one of my favorite books on business and leadership in 2020, "The Leader's Guide to Unconscious Bias" is available November 10th from Simon & Schuster.
Posted by RPropes at 7:09 PM